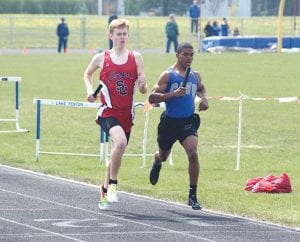 The Cavs participated in the Big Nine Pre-Season Tournament at Davison Country Club Monday and took fourth with a score of 456. Davison won the tournament for a third consecutive year with a 328, Powers had a 353 and Flushing shot a 360. The players were facing winds of up to 40 mph.

The Cavaliers lost to Lapeer West last Wednesday to open the season, 167- 201. Jack Baker led the way with a 47 for Carman-Ainsworth, Haywood Petty shot a 48 and Jacob Linder and Kameron Rytlewski each carded a 53. West’s Chet Ryeson shot a 38 for the lowest round.

Carman-Ainsworth travels to Monroe today and the 22-team Lapeer Tune Up tomorrow. — E.H.

The Lady Cavs’ varsity team made the journey over to Ann Arbor Father Gabriel Richard Monday, just barely getting edged out, 6-5, despite three goals by Allia Howard and two from Alexus Colby. 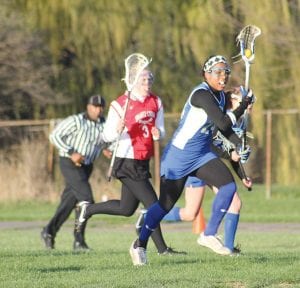 Middle: Carman-Ainsworth’s Allia Howard moves in for the score during a lacrosse match.

Carman-Ainsworth wound up tangling with Oxford on April 11, and while the contest was back and forth throughout, it was The Lady Cavs who found themselves on the wrong side of a 12-11 overtime decision.

Next up for the Lady Cavs is a trip to Flushing for a Big Nine contest today. — M.S.

The Carman-Ainsworth girls’ tennis squad suffered its first loss of the season on Thursday against conference rival Flushing, 7-1. The Cavaliers also competed at the Goodrich Tournament on Saturday, coming in second place with 11 points. Match-by-match results were not available by our deadline. 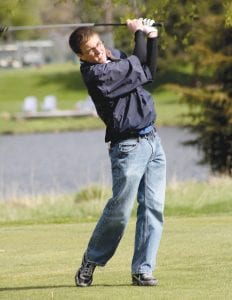 Below: Carman-Ainsworth’s Andrew Ford watches a tee shot fly down the course.

The Cavaliers will be back on the courts on Thursday, hosting Flint Powers Catholic. — B.P.

It was quite the weekend for the Carman-Ainsworth track teams that began on Friday at Kearsley’s annual early bird relays, and concluded on Saturday at the Lake Fenton relays. Both the girls’ and boys’ squads took second place in the Kearsley relays, as each fell just short of Big Nine foe Davison.

“Friday, we actually entered two teams,” said boys’ coach Kenn Domerese. “We had our main team in the large division, and a smaller team in the small division. We actually got runner up in both. We just had a couple of problems in events that cost us first place in the large school division.”

The Cavs took the 800-meter relay in 1:32.9 thanks to Shane Barron, Javonte Alexander, Antwon Curtis and Greg Lenoir. The progressive relay team was also successful, with Barron, Alexander, Tyler Minor and Javonte Curtis finishing in 1:36.8. Malik Seales and Myles Overton won the shot put relay with a combined 94-feet, 11-inches. Boys’ results from the Lake Fenton relays were not reported by our deadline.

“it was a nice opening,” added Domerese. “We obviously weren’t thrilled about not winning the thing. We actually had a split squad and got runner up in both, so it wasn’t a bad deal. A lot of the young kids got to run, and a lot of them ran some pretty fast times. It was a really good start. Winning the (Lake Fenton) meet, we actually won three trophies in two days.”

The girls’ team also came in second at Kearsley, and just like the boys’ squad, the Lady Cavs were able to come in first place at Lake Fenton, solidifying the win with a 92-point effort. The Kearsley results were not reported by our deadline.

The Cavaliers won the 400-meter relay at Lake Fenton with Ashley Hall, Denisha Gates, Italy Daniels and Jordan Jones finishing in 54.9. The Lady Cavs also found success in the 800-meter relay, as Hall, Jones, Daniels and Jalisa Johnson finished in 1:50.7.

“Actually, I am very pleased with what we did,” said girls’ coach David Thrash. “I wasn’t quite sure how it was going to go. We’ve got so many new kids. We graduated about 11 kids last year, so I was really quite concerned about this year. They’re responding very well, and I am pleased with it so far.”

The Cavaliers will have the rest of the week off before heading to Lansing Sexton for a meet on Saturday. — B.P.