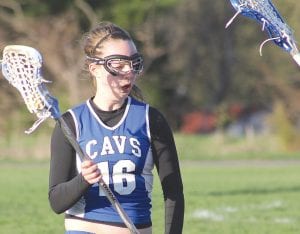 Carman-Ainsworth’s Hannah Fiewig looks for space as she prepares for her next move.

Davison’s Gabe Schiller took medalist honors with a 74, while Nick Hocker of Oxford and Alex Cramer of Powers finished second with a pair of 77’s.

Host Lapeer West won the tournament with a 329, Brandon was second with a 334 and Oxford was third with a 336.

Last Thursday, Carman-Ainsworth traveled to Montrose and beat the Rams, 194-211. Linder and Rytlewski led the Cavs with 47’s, Petty carded a 48 and Ford had a 52.

Carman-Ainsworth travels to Powers on Monday for a Big Nine Jamboree and Valley Lutheran on Tuesday. — E.H.

As the 30th and 32nd ranked teams for the state of Michigan in Div. II, the Flushing and Carnan-Ainsworth varsity girls’ lacrosse squads came in to their contest on April 19 about as evenly matched as two rosters could be. All that speculation didn’t last, though, as the Lady Cavs ended up getting beat, 16-5, by the Lady Raiders.

Leading the offense for Carman- Ainsworth in this one was Allia Howard with three goals and scoring once each were Shakira Wilson and Hope Woodruff. Having also fallen to Oxford, 12-11, in overtime on April 11 and Father Gabriel Richard, 6-5, on April 16, the Lady Cavs are in action at Swartz Creek today and on Tuesday are at Midland. — M.S.

It was tough going against Big Nine rival Flint Powers Monday, as the Chargers blanked Carman-Ainsworth, 5-0. Powers scored three goals in the first half and two in the second. Savanna Lacey made 14 saves for Carman-Ainsworth.

Jasmine Jones took the feed from Shelby Marsh to kick off the scoring at 28:42, and Marsh scored at 21:25 assisted by Jones. Jones then scored again at 20:26 off a pass from Amber Richard.

In the second half, Jones and Marsh paired up again with Jones scoring at 7:01. Marsh then got the game-winner at 3:13 assisted by Jones. Keeper had 17 saves.

“In the first half, we had perfect play and worked the ball as a unit making quality shots,” said coach Jessyca Matthews. “We were a little flat in the second half, but once we stepped out of our trance, we had strong play and got the win.” — L.P.

The Lady Cavaliers took on even more stiff competition over the past week, traveling to Saginaw Heritage for their annual Heritage Invite. Carman-Ainsworth totaled seven points, placing them in third behind Traverse City West at 22, Saginaw Heritage at 17, and above Mt. Pleasant, which scored two. None of the Lady Cavs were able to secure victory at their respective positions. However, Kost made it to the final match of No. 1 Singles, falling to Traverse City West’s Sommer Ellul, 6-2, 6-2. Alexis Burnett suffered the same fate at No. 3 Singles against Saginaw Heritage’s Katherine Flegnheimer, 6-2, 6-3.

Carman-Ainsworth also headed to the St. John’s quad on Saturday, finishing in second with 12 points. St. John’s claimed first with 24, while Swartz Creek placed third with 11, and Ithaca finished last with two. Kost would be the only one to finish first, claiming the top spot at No. 1 Singles.

The Lady Cavs took on Flint Powers Catholic after we went to press on Wednesday, and will travel to Flushing today. — B.P.

The boys’ and girls’ squads hosted Flushing on Tuesday for their first action on the Big Nine Conference schedule. The boys pulled out the win, 81.5-55.5, as did the Lady Cavs, 77-59.

On the boys’ side, Jaylen Randels came in first in the high jump with 5- feet, 8-inches, and Kiyon Bush was victorious in the long jump at 20-feet, 3- inches. Myles Overton threw a solid 50-feet in the shot put, and Cleandre Robinson claimed first in the discus with 130-feet, 2-inches. Bryant Hudson won the 100 hurdles in 15.60, and Demarion Allan won the 100- meter dash in 11.10.

“It really feels good, because Flushing is a pretty darned good team, they have some good kids. It was nice to win,” said girls’ coach David Thrash. “We’ve got this one behind us, and now we look forward to Davison and Powers. We know we’ve got to improve each week because they’ve got some good kids as well.”

The Cavaliers traveled to Lansing Sexton on Saturday, as the boys’ squad came in third with 109 points, while the girls’ team took victory over the entire field with 133 points. The Lady Cavs had a superb performance in the long jump with Proby taking victory at 15-feet, 7-inches, and Taylor Minor came in second at 15-feet, 5-inches.

“One of the things is we’re a young track team, so we still make a lot of mistakes,” said boys coach Kenn Domerese. “Some of our performances, it was our fault that we didn’t warm up properly. Young teams don’t understand how important that is. It really affects your time. We still have to become track smarter.” — B.P.