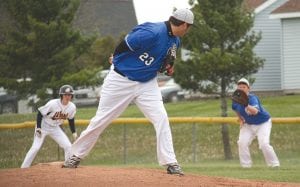 The Cavaliers took the field at Broome Park in Genesee County over the weekend to compete in the first round of the Tom Cole Greater Flint Tournament, an effort that ended with a 3-0 loss to former Big Nine rival Kearsley last Friday. Carman- Ainsworth was within striking distance for the majority of this contest after holding the Hornets scoreless for the first three innings, only to see Kearsley take command at 2-0 in the fourth.

Down but not out, the Cavs then had nine more outs to pull within striking distance, but instead the Hornets had the defense and the pitching to keep the Carman-Ainsworth bats locked down while adding an insurance run in the seventh. Helping to make all this happen for Kearsley was Hunter Phipps’ complete-game pitching performance, Tyler Ford swatted an RBI double, and working his way to a sacrifice RBI was John Crannie. The Cavaliers also didn’t help themselves by making a fourth-inning error that led to one of the Hornets’ other runs. 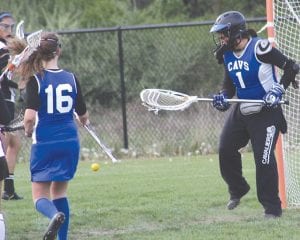 Lapeer West hosted the Cavs last Thursday for a non-league twin bill, winning a high scoring opening contest, 11-10. Leading the hit parade for the Panthers was Mike Fearon with three hits, including a double, and three RBI, Broc Wilkinson added a trio of singles and bringing in two hits and two runs was Spencer Pins. Another factor working against Carman-Ainsworth was the fact that it took West pitcher Garrett Miller for six runs on six hits with five strikeouts in 3-2/3 innings, yet he still managed to somehow earn the decision. The Cavs did grab the nightcap, 10-3, though, despite West’s Tyler Wills managing two hits and a run, Hunter Sharrard had a single and a run and Mike Fearson was good for a hit.

The Carman-Ainsworth golf team traveled to the Flint Golf Club on Monday for a Big Nine Jamboree hosted by Flint Powers. 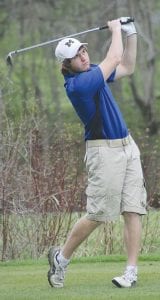 Despite a host of scheduling issues this past week, the Lady Cavs were still able to take on Midland on Tuesday, losing, 12-8. Alexus Colby was the high scorer for the game for Carman-Ainsworth with three goals, Allia Howard and Faith Woodruff each scored twice, and posting the squad’s final goal was Kelsi Helton.

Tha Lady Cavs are at Swartz Creek on Monday. — M.S.

The Lady Cavaliers started out strong, but have had difficult time with the Big Nine schedule thus far, and it continued on Tuesday, as they fell to Flint Powers Catholic, 6-2.

At No. 1 Singles, Taylor Kost was the only singles player to win for the Lady Cavs, topping Sirisha Pasupuleti, 6-3, 6-4. The only doubles win for Carman-Ainsworth came at the No. 3 spot, as Whitney Reynolds/Rachel Sherwin took down Zoe Biggart/Stephanie Groesser, 1-6, 6-4, 6-4.

The Cavs were also on the courts on Thursday with a 6-2 loss to Flushing. Kost won the only singles match for the Cavs at the No. 1 spot, defeating Olivia Conover, 6-0, 6-4. The other Carman-Ainsworth triumph came in No. 1 Doubles, as Rachel Alexander/Hailey Hutchins took down Leah Cost/Ashley Makidon, 6-4, 6-3, 6-4.

Carman-Ainsworth faced some more adversity on Wednesday in a loss to Flint Powers Catholic, 7-1. The Chargers took the win in every match up except for No. 1 Singles, where Kost defeated Pasupuleti, 6- 1, 6-1. — B.P.

The Cavs’ track squad picked up the win on both sides of their meet against Flint Powers Catholic on Tuesday, with the boys winning, 112-25, and the girls winning, 90-38.

The Cavaliers will not be back on the track until Friday, when they host the annual Jon Runyan Classic. — B.P.