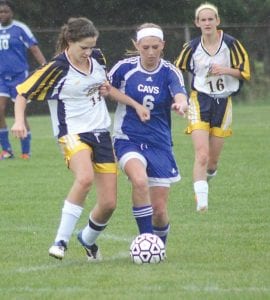 The Cavaliers’ varsity baseball team seemed all but done after Powers headed into the seventh inning of the first game of a Big Nine double feature with an 8-1 lead. Instead, Carman- Ainsworth shocked the Chargers by parlaying hits from Jamal Dixon, Brennan Gleason, Jake Weissend and Brandon Bobcean into a six-run rally, leaving the Cavs just shy of their intended goal and on the wrong side of an 8-7 decision.

For Powers, Ethan Wiskur and Connor Fridline both had twohit, two-RBI showings and Brett Hresko got the win after allowing seven hits with seven strikeouts. The biggest thorn in Carman-Ainsworth’s side was the fact that all of the Chargers runs were unearned.

It was all down hill from there, as the Cavs lost game two to Powers, 12-1. Posting hits for Carman-Ainsworth were Weissend and Dixon. The Chargers, on the other hand, were paced by Wiskur’s two-run homerun, Fridline had a bases loaded triple and adding two hits and two RBI to the cause was Spencer Harchick. On the mound for the Chargers, Harchick earned the victory by giving up seven hits with six strikeouts.

“With our loss to Powers in game one Carman-Ainsworth has lost (seven one run games and four by three runs or less). We have been beating ourself lately. Our pitchers have been throwing some very good games we have not helped them in the field. At the plate we have left too many runners in scoring postion,” said coach Tom Miller. “Our confidence is down. It sees we have mentally lost our focus at times. We could very easily be a .500 team or better with one less error or key hit. We can’t say any one player or hitter. We all failed at times when the pressure was on.”

In a league twin bill rescheduled from May 7 because of weather, the Cavs lost at Flushing on May 9, 5-2 and 6-0. Defense was once again the Achilles heel, leaving pitcher Colin Heaton to take the defeat in the opening matchup despite holding the Chargers to just one hit because of the six errors by Carman-Ainsworth. Posting a hit each for the Cavs were Grant Roe, Gleason and Justin Hubbard. Matchup number two was more of the same as Carman-Ainsworth made five errors and got taken for four unearned runs by Flushing.

One thing that did go right for the Cavs was the five-hit pitching performance they got from Gleason and Hubbard, who also had two of his teams four hits for the contest.

Carman-Ainsworth, 7-17 overall, 0-10 Big Nine, is at Holly for a pair of non-conference games today and on Monday the Cavs play their final league doubleheader at home against Davison. — M.S.

The Cavaliers traveled to the Flint Elks Golf Club on Monday for another Big Nine Jamboree hosted by Flint Powers.

Davison won the event with a 152, Powers took second with a 163, Flushing was third with a 167 and the Cavaliers finished fourth with a 202.

The victory for Davison ran their streak of undefeated play in the Big Nine to three straight years. Davison’s Zac Brammer took medalist honors with a 36, while Dave Thompson and Gabe Schiller each carded 37s.

The Lady Cavaliers are finding the competition a bit tough, losing to Big Nine rival Flint Powers, 1-0, on Monday.

Jasmine Jones scored the Cavs’ two goals against Valley Lutheran, both in the first half.

The Cavaliers dropped a Big Nine Conference doubleheader to Powers Catholic on Monday, 13-3 and 14-4, at Powers. C-A was within 5-2 in the opener, but the Chargers scored four runs in the fourth inning and four in the fifth to end it via the mercy rule. Jennie Klapko had two hits and Kelsey Ferguson doubled in a run for the Cavs. Keri Crane allowed six earned runs in five innings and struck out three. Jessica McClung pitched the five-inning nightcap, also allowing six earned runs. The Cavs got within 5-3 in the third, but Powers pulled away with a five-run fourth and a three-run fifth.

The Cavaliers snapped an 18-game losing streak with a 4-1 win over Durand in the first game of a non-league doubleheader last Thursday at Durand. Carman-Ainsworth nearly made it a sweep, but dropped a 26-hit slugfest in the nightcap, 6-5.

Crane won the opener, scattering 10 hits while striking out three and walking nobody. She also had a double at the plate, while Kamrin Gold singled, scored and drove in a run. The Cavs broke a 1-1 tie with a three-run sixth inning.

Carman-Ainsworth had 12 hits in the nightcap and rallied from a 3- 0 deficit to take a 5-3 lead in the fifth inning. Durand answered with one run in the bottom of the fifth and two in the sixth to pull it out. Gold had two more hits and an RBI, and Meghan Borgerding, Jessica Smith, Haley Snider and McClung each added two hits.

The Cavs, 3-21, will visit Holly today and play in the LakeVille tournament Saturday. — D.N.

Rachel Alexander/Hailey Hutchins won at No. 1 Doubles over Kasey Dollinger/Jasmin Lichtenauger, 6-1, 6-1, and Ashleigh King/Cionna Orr locked up the No. 2 Doubles spot, knocking off Haley Eldred/Abbie Kalahar, 6-1, 6-3. Whitney Reynolds/Rachel Scherwin took the No. 3 Doubles match up, 6-3, 7-5, and Mishall Khan/Taylor McFadden won at No. 4 Doubles, 6-3, 6-1.

Carman-Ainsworth had a rough match up on Friday when it was pummeled by visiting Fenton, 7-1. The only match that the Cavaliers were able to secure victory in was the No. 1 Doubles spot, as Alexander/Hutchins took down Lily Dubois/Emily McIntosh, 6-2, 6-4.

The Cavs competed at the Big Nine tournament at Flushing last Thursday, and placed fourth in the four-team league with 12 points. Carman-Ainsworth was unable to qualify for the finals in any position except for the No. 1 Doubles, where Alexander/Hutchins lost to Flint Powers Catholic, 4-6, 5-7.

The Lady Cavs compete in the state regionals today at Saginaw Heritage. — B.P.

Lariah Simpson was victorious in the 100-meter hurdles in 16.22, and Denisha Gates placed second in the 300-meter hurdles in 50.17. The 4×100 relay team locked up a first-place finish as Ashley Hall, Lauren Riley, Gates and Daniels finished in 51.99, followed by a win for the 4×200 relay team with Simpson, Johnson, Daniels and Hall crossing the finish line in 1:45.79.

Johnson, Rani Richardson, Maeonna Polacek and Kendra Carroll took second place in the 4×400 relay in 4:16.40, and Angel Proby placed second in the high jump at 5-feet. Proby then won the long jump with 16-feet, .75-inches.