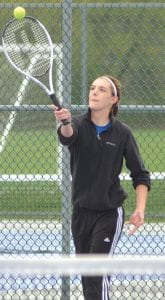 The Lady Cavaliers’ season came to an end on Thursday at the No. 8 regional of Div. 1, where Carman-Ainsworth totaled just two points, finishing in ninth. None of their individuals were able to qualify for the state meet. Midland Dow came in first with 29, Grand Blanc in second with 19 and Grand Ledge in third with 13. Teams had to win the regional outright, place second or earn 18 points to advance. The winner and runner-up at No. 1 Singles automatically moves on.

Prior to that, the Cavs wrapped up the regular season with a 5-3 loss to Lapeer West, making up a match that was originally scheduled for May 4. At No. 1 Singles, Taylor Kost picked up the win over Emily Prykucki, 6-3, 6-1, while Katie Wilson fell at No. 2 Singles, 6-3, 6-1. Yeon Jung Park was able to secure victory, topping Sarah Morris, 6-3, 6-2. Brieanna Hudson added to the effort by taking down Amanda Clor, 6-3, 6-1. 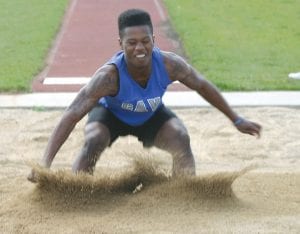 The Cavaliers’ Jaylen Randle competes in the long jump for the boys’ varsity track and field squad.

Carman-Ainsworth welcomed non-league opponent Holly last Thursday and lost, 182-194. The Bronchos were led by medalist Phil Samson’s 41 and Kyle Pepper’s 45. Carman-Ainsworth was led by Jack Baker with a 47 and Haywood Petty and Jacob Lidner each shot a 48.

The Cavs traveled to Fenton Farms yesterday after our deadline for the final Big Nine postseason tournament. — E.H.

The Lady Cavaliers began the postseason yesterday after we went to press at Williamston. — M.S.

For the boys’ squad, Jaylen Randle finished in second in the long jump with 20-feet, 9.75-inches, while the 800-meter relay team of Shane Barron, Antwon Curtis, Javonte Alexander and Gerald Holmes took first place in 1:29.14. The 400-meter relay team came in second with Alexander, Holmes, Curtis and Barron crossing the finish line in 43.36. Barron then went on to take second in the 400-meter dash in 48.13 and Holmes placed third in the 200-meter dash in 22.79. The boys capped off the day with a thirdplace finish from the 1600-meter relay squad of Barron, Alexander, Randle and Curtis, finishing in 3:21.82.

The Lady Cavs’ got off to a good start when Angel Proby placed third in the high jump at 5- feet, 2-inches. Lariah Simpson claimed the top spot in the 300-meter hurdles cruising to a time of 15.62, and also helped the 800-meter relay team take first place in 1:45.66 along with Jalesia Johnson, Ashley Hall and Italia Daniels. The 400- meter relay team of Simpson, Hall, Daniels and Denisha Gates placed second in 50.72 Johnson was the top finisher in the 200-meter dash, finishing in 26.59.

Several Cavs qualified for the state finals, including Cleandre Robinson in the discus, Randle in the long jump, Barron in the 400-meter dash, and also making the cut were the 400, 800 and 1600-meter relay teams. For the Lady Cavs, Proby qualified in the long jump, Simpson in the 100-meter hurdles, Johnson in the 200-meter dash, and the 400 and 800-meter relay teams also made it through. The state meet takes place June 2. — B.P.