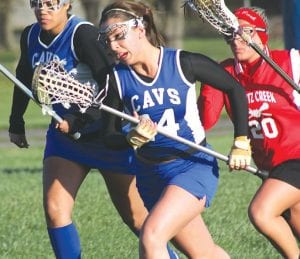 In the first round of the Michigan High School Athletic Association championship tournament, the Carman- Ainsworth girls were eliminated by Williamston, 13-0. Williamston next took the field yesterday after we went to press in the regional semifinals at Okemos, which beat Saginaw Heritage, 16-3, in its initial postseason contest. — M.S.

The Cavaliers finished in second place in the boys’ and girls’ competitions at the final Big Nine meet last Thursday. The boys totaled 189 points, and the girls scored 161 points. For the boys, Jaylen Randle won the long jump at 20-feet, 10.5-inches, while Bryant Hudson locked up the top spot in the 110-meter hurdles in 15.35.

As expected, Shane Barron was victorious in the 100-meter dash in 10.52 and he also secured first place in the 400-meter run in 49.03. Hudson was back at it in the 300-meter hurdles, finishing first in 40.48 and Gerald Holmes took victory in the 200-meter dash in 22.16. The Lady Cavs found success with Angel Proby, whose 15- feet, 10-inches was enough to wrap up first place in the long jump. Recent college commit Lariah Simpson was the top runner in the 100-meter hurdles, finishing in 15.42. The Cavaliers now prepare for Saturday’s state meet. — B.P.