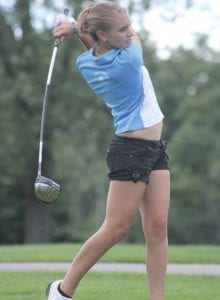 Taylor Talbert follows through on her swing for the Carman-Ainsworth varsity girls’ golf team.

The Cavaliers participated in the Early Bird Relays at Kearsley last Wednesday which was won by the Hornets with 45 points. Goodrich also had 45 points, but lost the tiebreaker. Fenton was third with 49 points.

The Cavs hosted the Cavalier Classic yesterday and travel to the Corunna Invitational on Sept. 8. — E.H.

The Carman-Ainsworth girls’ golf team bounced back at Friday’s Bay City tournament, where the Cavaliers finished the day in seventh place out of the 14 teams competing, amassing a score of 425. Davison took first place with 333, and Flushing was the runnerup with 346.

Meghan Borgerding was the leader for the Cavaliers during their impressive performance, as she tallied a 83. Selena Johnson came in with a 101 and Mikaila Garrison recorded a 115. Taylor Talbert shot her way to a 126, while Morgan Genore chipped in with a 130.

On Monday, the Lady Cavs were at the Charger Invitational, totaling a score of 466. Borgerding rolled to a 95, while Johnson shot a 111. Garrison and Genore each finished the day with a score of 130, and Talbert had a 137.

“We’re so far ahead of last year it’s not funny,” said coach Bob Blaylock. “They’re so much better than last year, so sometimes I have a higher expectation than maybe what I should have. We played a tough course (Monday), but I think we’re in good shape. I’m very pleased with the progress we’ve made.” — B.P.

The Lady Cavaliers hosted the Cavalier Classic yesterday and are at the Corruna Invitational on Sept. 8. — M.S.