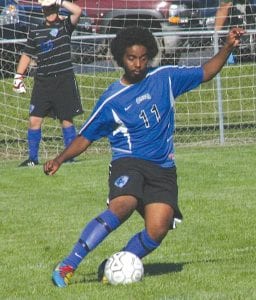 Ammar Mohamed clears the ball from Carman-Ainsworth’s end of the field.

Meghan Borgerding cracked the top 20 with a 92 to lead the Lady Cavaliers at the Charger Invitational on Monday at Flint Golf Club. Borgerding was 19th as Carman finished 14th with a 535 total. Selena Johnson shot 127, Taylor Tolbert 141 and Keri Hart 175. — D.N.

Another shutout loss, this time against Kearsley, 3-0, on Monday leaves the Cavs at 0-5 on the young season. Jake Yencer was in goal and made around 17 saves, said coach Jay Witham.

“It just was not a very good game for us,” Witham said. “We didn’t come out with hardly any energy. It’s tough at 0-5 right now and we’re trying hard to find the wins. We’ve been in the games, just couldn’t capitalize.”

Witham added, “It’s very frustrating right now. I keep telling the boys we have to come out and play physical and hard and we just aren’t doing that right now. We have to dig deep and keep trying hard in every game.” 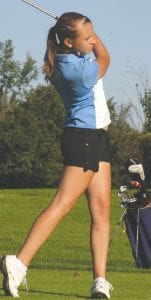 Taylor Tolbert teed off in a tournament earlier this season.

The Cavs took a 3-0 loss against Fenton on the chin last Thursday, with Fenton taking the 1-0 lead in the first half. Two more goals in the second put the game out of reach.

Yencer had 13 saves for the Cavs.

The Cavaliers simply ran out of gas against Lapeer West last Wednesday, allowing West to seal the win, 1-0. West’s Andrew McGeary scored the lone goal of the game.

For Carman-Ainsworth, Yencer had seven saves and Garrett Clements had eight.

“It was a good game back-and-forth and both teams had four or five opportunties to score,” said Witham. “We just ran out of gas letting them score with about eight minutes left.” — L.P.

“It was a great defensive and serving game,” said Carman coach Barbara Hurand. “We need to be more aggressive with our attack and not be afraid to lose but I’m proud of how we played.”

Last Saturday, the team traveled to the Linden Tournament and finished 4-3 overall and in third place out of 15 teams.

Carman beat Vandercook Lake, Swartz Creek and Linden to win their pool. They advanced to the power pool and lost to New Lothrop. Carman lost to Midland Dow twice on the day including in the gold semifinals. The Lady Cavs beat Lapeer West in the gold quarterfinals.