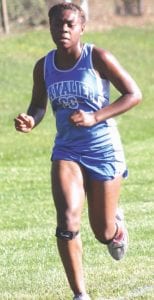 Carman-Ainsworth’s Randi Richardson on course for the Lady Cavs.

The Cavaliers participated in the Cavalier Classic on Aug. 29 and finished in fifth place with 117 points. St. Clair won the event with 18, Brandon was second with 78 and Swartz Creek was third with 82. James Johnson was the top finisher for the Cavaliers in 10th place in 18:24.

The Lady Cavaliers participated in the Cavalier Classic, but did not have a team score. Davison won the event with 26 points, Lakeland was second with 43 and Brandon was third with 75. Randi Richardson was the top finisher for Carman-Ainsworth in 19th place in 29:07.

The Cavaliers will travel to the Corunna Invitational on Saturday and goes to Delta College on Tuesday for a Saginaw Valley League Jamboree. — E.H.

The Lady Cavs put forth an impressive showing at the Saginaw Valley League jamboree on Wednesday, where Carman- Ainsworth placed seventh out of the 12 schools competing, compiling a score of 424. Meghan Borgerding had a stellar day, shooting an 82 to take the top individual spot at the meet. Selena Johnson came in with a 108, followed by Hope Woodriff with a 109. Taylor Talbert rounded out the Cavaliers’ scorecard with a 125. — B.P. 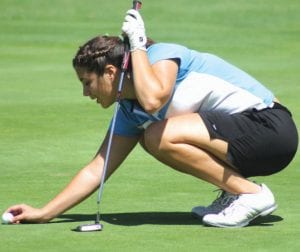 Meghan Borgerding positions her ball for a putt.

Anas Morsi scored two goals and Terance Green also connected, as the Cavaliers tied Owosso, 3-3, in a nonleague game Aug. 29 at home. Green and Leon Bell had assists, and Andrew Ramirez made 13 saves in goal, as Carman-Ainsworth followed up its first win in nearly two years with a tie.

The Cavs, 1-4-1, made their Saginaw Valley League debut with a crossover game yesterday against Midland. They will visit Flint Northern next Wednesday. — D.N.

Carman-Ainsworth’s volleyball team lost to New Lothrop, 20-25, 25-27, last Thursday at the New Lothrop tournament, but beat every other opponent it faced.

In their first home meet of the 2012 varsity girls’ swim and dive season, the Lady Cavs lost to Saginaw Heritage last Thursday, 65-120.

Prior to that, Carman-Ainsworth started the season on Aug. 28 with a 100-85 win at Kearsley.

The Lady Cavs, 1-1 overall, 1-1 SVA, are at the Fenton Relays on Saturday and host Saginaw Arthur Hill on Tuesday. — M.S.