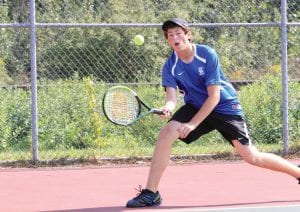 Carman-Ainsworth’s Noah Reed is taken wide on a return shot.

The Cavaliers traveled to Delta College on Tuesday for a Saginaw Valley League Jamboree hosted by Bay City Western and finished eighth with 242 points. Saginaw Heritage was first with 27 points, Midland was second with 98 and Bay City Western was third with 113.

Carman-Ainsworth will travel to Showboat Park today in Chesaning. — E.H

The Lady Cavs finished in seventh place at Friday’s Genesee County Girls’ Golf Tournament, totaling a 461. Meghan Borgerding shot a 93 to lead Carman-Ainsworth, while Selena Johnson chipped in with a 102. Mikaila Garrison and Morgan Genore each recorded a 133 on the day.

“It was a beautiful day and we just didn’t play well,” said coach Bob Blaylock. “We had probably our second highest team score for the year. We’ll just keep plugging away. I have two girls that are out, both with wrist injuries. I hope to get them back. When someone has a bad day, you need someone else to pick them up. They’re working hard and we’re playing well, we just hope to get our other two girls back.” — B.P. 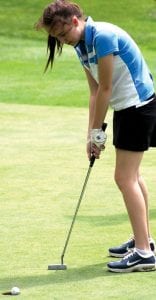 Carman-Ainsworth’s Morgan Genore watches her putt fall into the cup.

Carman-Ainsworth/Flushing finished 13th with a

score of 142 at the 16-team Fenton Relays last Saturday, placing them just behind Haslett with 144 in 12th place, but ahead of Holly with 108 and Oscoda with 76. Taking the top spot was the Hartland A squad with 390, Brighton was second at 354 and posting marks of 322 and 290 to come in third and fourth, respectively, were Howell and Grand Blanc. That left Bay City Western and White Lake Lakeland tied for the sixth spot with 264, Saginaw Heritage had 244 points to come in seventh and Hartland B was eighth at 186. The host Tigers were the ones to claim the ninth slot with a score of 178, Powers had 166 and Kearsley slid in to the 11th position with 160. The Lady Cavaliers were also in action at home on Tuesday for their first-ever Saginaw Valley League meet against Saginaw Arthur Hill, which only brought seven swimmers to the meet. As such, Carman-Ainsworth/Flushing won big, but scores and times were not available from first-year head coach Megan Kennedy prior to our deadline. Yesterday, the Lady Cavs were at Midland Dow and on Tuesday the squad hosts Flint Southwestern for league matchups. — M.S.