The Cavaliers’ Ahmir Dunn on the course a few weeks back.

The Cavaliers finished last with 158 points at the Chesaning Invite last Thursday. Flushing won with 40 points followed by Ann Arbor Huron with 53, Clarskton had 89, Owosso had 97, Brandon had 101 and Kearsley finished with 126.

James Johnson was the top Carman- Ainsworth finisher in 11th place in 17:49. Owosso’s Eli Jenkinson won the race in 16:48.

Flint Southwestern/Northern brought their combined effort to Carman- Ainsworth/Flushing for a Saginaw Valley Association meet on Tuesday. While the Lady Cavaliers were able to pull out the victory, scores and times were not available. Carman-Ainsworth was also competing in league action on Sept. 13 at Midland Dow, where the squad got beat 131-32. In its first-ever SVA matchup the Lady Cavs lost at home to Saginaw Arthur Hill, 32-81, on Sept. 11, as well. All this came after placing 13th in a 15-team field at the Fenton Relays on Sept. 8 and on Aug. 30 Carman-Aisnworth/Flushing lost Saginaw Heritage, 65-120. 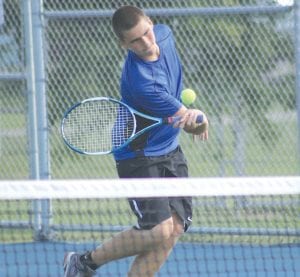 The Lady Cavs next hit the pool on Sept. 27 at Fenton for the Genesee County Meet. — M.S.

Carman-Ainsworth’s only tennis competition the past week came in a nonleague meet Monday at Brandon, where the Cavaliers dropped an 8-0 decision.

Two Saginaw Valley League-South Division meets, scheduled for last Thursday at Flint Northern and Tuesday against Flint Northwestern, were canceled because those schools do not have teams this year.

The Cavaliers simply pasted Flint Northern Tuesday, 25-4, 25-3, 25-5, with Alexus Colby named Player of the Game after serving 100 percent with 34 points and 19 aces. Aubrey Mikovits had 10 points, five aces and two digs, Monica Townsend had eight points, four aces and four digs and Kali Jackson had seven points and two aces. Kayla Tigner had 16 assists and one dig, Tori Henderson had one dig and Jessica Smith had one dig.

Against North Branch, Jessica McClung and Smith had two kills apiece, while Deja Lester had three. On serve, Smith and McClung had one point each, with McClung notching one ace. Breanna Hudson and Mikovits had two points each. Townsend had 15 digs, Smith had six and Mikovits had six. Smith led in serve receives with 10, Mikovits had nine and Townsend five.