The Cavaliers participated in the Greater Flint Cross Country Championships and finished 14th overall with 352 points. Clio won the event with 73 followed by Grand Blanc with 87, Davison with 110, Swartz Creek with 115 and Flushing with 125.

Carman-Ainsworth travels to the Goodrich Invitational on Saturday and goes to Strafford Woods for the final Saginaw Valley League Jamboree on Oct. 17. — E.H.

The Cavaliers completed their regular season Monday with an 8-0 loss to Goodrich in a non-league game at home. The Martians had a 3-0 lead at halftime, and ended the game via the mercy rule with five goals in the second half.

Carman-Ainsworth went 0-2 in the Saginaw Valley League tournament last Saturday in Saginaw. The Cavs lost a tough one to Midland Dow, 1- 0, missing a chance to tie it on a ball in the box late in the game. Carman- Ainsworth then fell to Davison, 4-0.

The Cavs also lost at Davison, 4-1, in their final Valley game of the regular season Oct. 3. Carman-Ainsworth forged a 1-1 tie at halftime on Leon Bell’s goal, off an assist from Terance Greene. But, Davison tallied three goals in the second half to pull away. 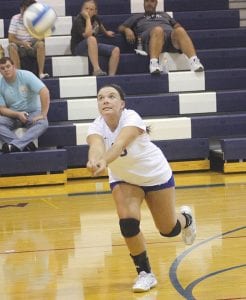 Aubrey Mikovits tries to make the play for the Lady Cavaliers.

Carman-Ainsworth finished 1-3 in the Valley and will take a 3-15-1 overall record into the district tournament next week at Oxford. The Cavs will visit the host Wildcats, 8-4-2, at 7 p.m. next Tuesday, with the winner moving on to play the Grand Blanc- Flushing winner next Thursday at Oxford. Davison and Clarkston meet in the other bracket Tuesday, with the winner playing Lake Orion next Thursday. The finals are at 10 a.m. Oct. 20 at Oxford.

“I wish we would have done it a lot earlier in the season,” Witham said. “He’s pretty athletic and quick, and he’s been doing a great job of taking care of their center-mids coming through, which we were struggling with.

“We’re actually starting to look like a soccer team this late in the season. We’re playing well and playing together. Our district is tough, with Grand Blanc and Lake Orion, but we start out with Oxford, which I think is a very winnable game. It’s going to be on field turf, which I think will benefit us. With the ball being fast and the speed we’ve got up top, I think it will help us.” — D.N.

Carman-Ainsworth/Flushing began a three-meet home stand on Oct. 4 by hosting Saginaw Valley League rival Midland, and while the squad swam hard from beginning to end, it still just barely got edged out, 89-97.

Placing first for the Lady Cavaliers were Rebecca Hrit, Emily Stemczynski, Mckenzie Bartlett and Selena Adams in the 200 medley relay in 2:08.94 and Ashleigh King, Dorothy Dollinger, Taylor Wheaton and Rebecca Bade were third in 2:03.8, Jennifer Messina won the diving with 173.5 and Stemczynski claimed the 50 free in 26.70.

Colby had 21 points and 14 aces to help lead the Lady Cavs over Flint Northwestern last Tuesday.