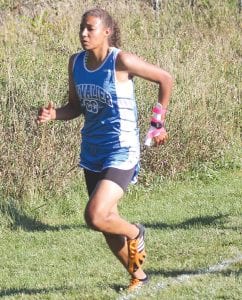 Carman-Ainsworth’s Shelby Marsh on the course sets her own pace.

The Cavaliers’ Jessica Smith prepares to serve in a match at home.

The Cavaliers participated in the Kayla O’Mara Invitational at Goodrich last Saturday and the boys’ squad finished 12th with 380 points. Saginaw Heritage won with 52 points, Linden had 60 and Holly was third with 109.

The girls’ squad did not record a team score. Davison won the meet with 54 points, Linden had 68 and Holly had 71.

Carman-Ainsworth was at Strafford Woods for the final Saginaw Valley League Jamboree of the season and hosts the Cavalier Invitational tomorrow. — E.H.

The Cavaliers defeated Flint Southwestern, 25-7, 25-11, 25-7, Monday with Tori Henderson named Player of the Match with four kills, six assists, four digs and three aces. Henderson played rightside hitter and setter, serving in a Jack of All Trades role, according to coach Barb Hurand. “Her best performance of the season,” Hurand noted.