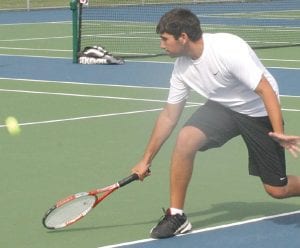 Cameron Simmington makes the backhand at No. 1 Singles against Lapeer West.

James Johnson finished fifth in 18:54 to lead the Cavaliers to a third-place finish in their annual invitational, the Cavalier Classic, on Aug. 31. Carman totaled 77 points to finish behind champion Swartz Creek, with 20, and runner-up Flint Kearsley, with 47.

The Lady Cavaliers dropped a non-league match to Saginaw Nouvel, 211-239, on Aug. 31 at Fenton Farms.

The Lady Cavaliers swam against the combined squad from Kearsley/Clio Tuesday and lost, 103-83, despite Jennifer Messina placing first in diving with a score of 130.6. Emily Slemczynski was also a winner for Carman-Ainsworth in the 100 free with a time of 1:03.1. 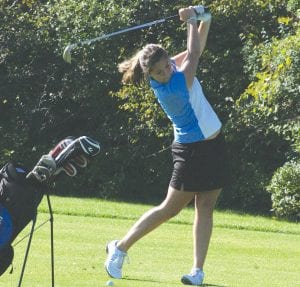 Meghan Borgerding took a practice swing before teeing off. 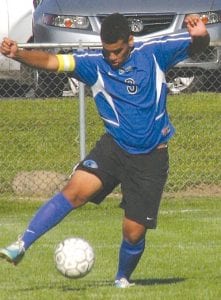 Carman-Ainsworth’s Cristian Freeman made a stop for the Cavaliers.