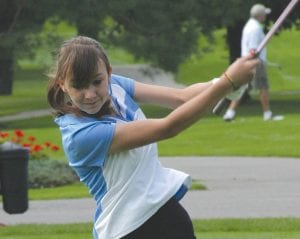 Morgan Genore drove off the tee in a meet earlier this season.

The Cavaliers’ boys’ team finished eighth in the eight-team Chesaning Invitational last Thursday, while the girls’ team placed ninth in the nine-team field. Neither team had enough runners to post a team score. James Johnson led the boys with a 22nd-place finish in 18:23 and Aaron DuPree was 29th in 18:49. Rani Richardson was Carman’s first finisher in the girls’ race, taking 45th in 24:31. Jalesia Johnson was 48th in 24:52. — D.N.

FOOTBALL Shane Barron rushed for 189 yards and three touchdowns on 25 carries to lead the Cavaliers to a 31-26 victory over Flint Powers Catholic last Friday at Carman-Ainsworth Junior High. The victory left Carman alone in first place in the Big Nine Conference at 2-0 and 2-2 overall. Barron had first-quarter touchdown runs of 42 and 56 yards as the Cavs took the lead for good at 14-0. Powers pulled within 14-7 midway through the second quarter, but Barron scored from the three to make it 21-7 with 3:24 left in the half. Powers scored 1:05 before halftime to pull within 21-14. The Chargers were driving again when Shahid Muhammad picked up a Powers fumble and returned it 61 yards for a touchdown and a 28-14 lead with 9:13 left in the third quarter. Powers scored the next two touchdowns, but failed on conversions after both to trail, 28-26.

Connor Storms, who kicked the extra point after all four Carman touchdowns, added a 32-yard field goal with 3:17 left to make it 31-26. Brandon Walker sealed the victory with an interception with 2:08 left. Carman has beaten Flushing and Powers in Big Nine play and will visit Davison this Friday at 7 p.m. The Cavs then will play all three teams again in the following three weeks. — D.N.

GOLF The Lady Cavaliers played six holes in the Davison Invitational on Monday before it was cut short by rain at Davison Country Club. The tournament was not rescheduled. Carman was slated to return to Davison for a Big Nine Conference jamboree Wednesday and will visit Holly in a non-league match today at Heather Highlands. — D.N.

SOCCER Davison took out its frustrations on Big Nine rival Carman-Ainsworth, Monday, winning, 8-0. Leading the offensive charge for Davison was Aaron Cummings, Brennan Simerau (2), Christian Pumphrey, Tyler Hodges, Zach Hummel, Elliot Konieczka and Eric Barrett on assists by Hodges (2), Simerau, Pumphrey, Ryan Fredwall and Jake Martin. “We struggled to find the back of the net in the first half. Players were forcing low percentage