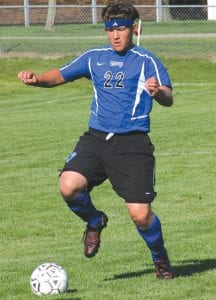 Colin Heaton moved the ball upfield in a game earlier this season.

shots and passes into tight spaces, rather than playing the ball early to space or feet. Once we settled down and played team soccer, we were able to play up to our potential and pour it on in the second half,” said Davison coach Marc Pittenger. ”Ten minutes into the second half we made a couple positional changes and it helped get us on the board. We were able to score seven goals in under 20 minutes. I guess when it rains, it pours. Carman-Ainsworth played us tough for 50 minutes. Our second and third goals of the game really dampened their spirit and we were able to take over offensively. Powers, Flushing, and CA will be coming at us with everything they have and we will need to play our best team soccer everyday.” — M.S. TENNIS