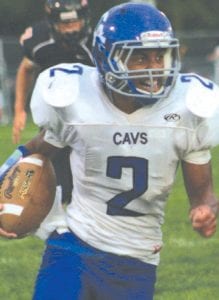 Rani Richardson ran a personal-best 24:11, but the Lady Cavaliers dropped a 15-50 decision to Flint Powers in a Big Nine Conference meet Sept. 28 at Carman-Ainsworth. The boys’ team also bowed to the Chargers, 19- 40. James Johnson led the Cavs with a fourth-place finish in 18:15. Aaron DuPree was sixth in 18:41 and Tyler Pangerl seventh in 18:43. Both Cavalier teams will run in the Greater Flint Area meet today at Dutch Hollow in Durand. — D.N.

Football The rain and mud didn’t slow Shane Barron one bit last Friday. The junior quarterback rushed for 337 yards and four touchdowns on 23 carries, leading the Cavaliers to a 43-20 victory over Flushing at Carman-Ainsworth Junior High. Barron scored on runs of 59, 50, 93 and 60 yards as Carman clinched a share of the Big Nine Conference championship at 4-0. The Cavs are 4-2 overall and can take the title outright with a win at Powers Catholic this Friday. Gerald Holmes added 98 yards on 14 carries in his first game back since the season opener, and Lorenzo Redmond had 25 yards on six carries. Each scored a touchdown as Carman came back from a 14-0 first-quarter deficit and outscored Flushing, 36-6, in the second half. — D.N. 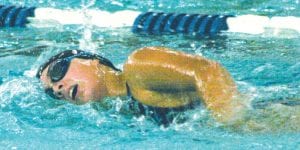 Carman-Ainsworth’s Patricia Hrit stroked through the water in a recent meet.

Glinka, Bade, Hrit and Howard in the 400 free relay in 4:38.14. The Lady Cavaliers are at the Saginaw Heritage Relays on Saturday. — M.S.

Volleyball The Carman-Ainsworth volleyball team moved into second place in the Big Nine when it defeated Davison in five games last Thursday, 25-20, 19-25, 25-23, 21-25, 15-13. Kamrin Gold once again led the Cavaliers with 31 kills, 24 digs, five aces and four blocks, Danielle McClung came through with 35 assists, Monica Townsend added 18 digs and Jessica Smith chipped in with eight digs and four aces. The Cavs, 17-15-2 overall, 2-1 Big Nine, travel to Flushing today and will look to move into a firstplace tie with the Raiders, who have not lost a Big Nine match in eight years. A roadtrip to the Saline Tournament is on tap for Saturday. — E.H.