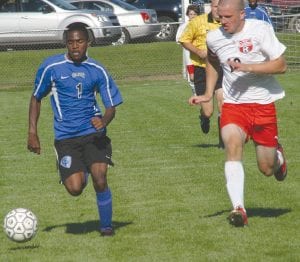 The Cavaliers lost to Swartz Creek on Monday, 1-0.

“Their number 20 buried a shot with about 1:50 left and we had two chances to clear the ball, but it stuck on his foot and he put it away,” said coach Jay Witham. “Jake Yencer had no chance on that one. We did play much better, more physical, and knocked the ball around a lot better. One of our starters last year, Alex Sarver, came back and helped tremendously, so that helped. He was a definite asset in the middle of the field.”

Witham noted that Anas Morsi had a couple of opportunities on breakaways, just couldn’t put them away. Yencer played well in net making seven saves on eight shots.

“Our defensive four was a lot better in this game, so that was a positive. We still need to get tougher, though and I told the kids we have to outwork teams and be more physical,” Witham added.

Last Friday was a wakeup call for the team after getting pasted by Clio, 4-0. 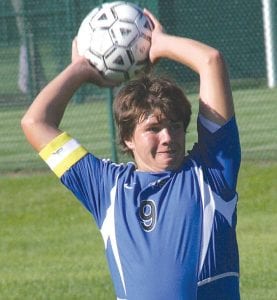 Brad Nickels prepares to throw the ball in bounds in recent action.

“They put it on us and our toughness just wasn’t there and they won all the balls,” Witham said.

Yencer had five saves on nine shots in that game.

After we went to press on Wednesday the Cavaliers faced Lapeer West at home. Carman takes on Fenton at Fenton today. — L.P. Tennis

Doubles would be no different for the Cavs, as they continued to dominate Lapeer West. In the No. 1 slot, Erick Van Dyne/Noah Reed took down Jeff Acton/J.T. Harris, 2-6, 6-0, 6-4. Tyler Field/Omeed Hekmati followed with a 6- 2, 7-6 (7-1) win over Sarah Clinton/Alex McEvoy. Chris Chowder/Mark D’Angelo took the win over Gage Harris/Shayne Moore, 6-1, 6-3. Jarron McAllister/Riley Simmington capped off the match with a 6-0, 6-1 win over Joseph Lange/Travis Lusignan. — B.P.