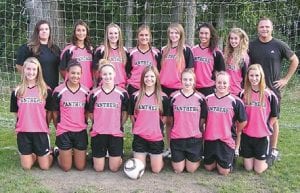 DAVISON — The MESA Panthers competed at the Force Invitational in Bloomfield Hills and captured their 30th tournament championship. MESA beat the Michigan Rush U17 MRL team, which is currently undefeated in MRL play and has already punched its ticket to the Michigan State Cup quarterfinals. The Panthers dominated the Rush next, beating them 5-2. Next, the Panthers played the Bloomfield Force to a 2-2 tie. The Panthers earned a spot in the finals by beating a fiesty Portage team, 5-3. The finals featured a rematch with the Force from their earlier tie game. MESA took matters into itsr own hands and didn’t look back, running away with a dominate 3-0 victory to earn the championship. — L.P.

Programs open to all

FLINT TWP. — Carman-Ainsworth high school will host several adult health and fitness programs currently offered through the Bendle/Carman-Ainsworth Adult and Community Education Program. This includes Tai Chi “Meditation in Motion” for $45 on Wednesdays from 6-7 p.m. from Nov. 14-Jan. 9, and Power Flex Yoga will be held on Tuesdays from 7-7:45 p.m. for $35 on Oct. 30-Nov. 27 or Dec. 4-Jan. 15.

As well as picking winners during the live harness races, bettors at Sports Creek will be able to wager on the best of thoroughbred and harness racing from around the world from noon until midnight seven days a week all year. Sports Creek’s live racing is also broadcast to wagering sites world wide.

By the end of the year, more than 100,000 fans will have passed through the gates at Sports Creek.

Sports Creek has a 480 seat terraced restaurant over looking the track so that you can catch all the action. Each table in the restaurant has a personal television to enjoy sporting events, TV shows or additional horse racing. Full menu and buffet is available on Friday and Saturday nights, and reservations are suggested. The fully enclosed and heated grandstands also include concessions and drinks.

In the exhibition contest, Smith scored two goals, including one on the power play, as well as recording two assists. Geml was able to pick up a goal and an assist on the night. Allen stopped 12 shots in the win, allowing just one goal during his time in net. UM-Flint will be back on the ice on Friday at Iceland Arena against Northwestern. In last week’s edition, we had an incorrect date for the first home game. It’s October 12 at Flint Iceland Arena. — B.P.

FLINT — The University of Michigan-Flint football team scored six touchdowns in the first quarter and beat Loyola-Chicago, 63-0, in a club game Saturday at Atwood Stadium.

Charvez Stewart rushed for 176 yards and three touchdowns and Ryan Vohwinkle ran for 139 yards and one touchdown. James Carr recovered a fumble in the end zone for a touchdown, Blue Smith returned an interception 37 yards for another score and Markus Tucker returned a punt 81 yards for a touchdown. Caleb Quintanilla had nine tackles as the Kodiaks’ defense held the Ramblers to 73 yards. Everybody played for UM-Flint, which led, 43-0, after one quarter, 57-0 at halftime and forced a running clock for the second half.

BURTON — The Bendle/Carman-Ainsworth Adult and Community Education program has numerous offerings for Fall 2012 that include Karate for Kids ages four and up for $25 at South Bendle on Tuesdays from 6:30-7:30 p.m. Nov. 13-Jan. 15. Karate for Kids is also available at Woodland from Nov. 15-Jan. 17 on Thursdays from 6-7 p.m.

With all classes taught by Black Belt instructors and each course combining Sanchin-Ryu Karate and Self Defense and Project Secure Child (child saftey), other offerings include Karate for Families for anyone ages four and up for $50 at South Bendle from Nov. 13-Jan. 15 on Tuesdays from 6:30-7:30. That same class will be available at Woodland from Nov. 15-Jan. 17 on Thursdays from 6-7 p.m. — M.S.