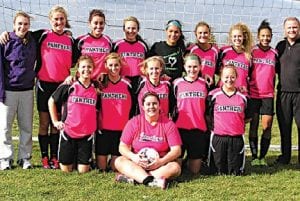 INDIANAPOLIS, IN. — On Nov. 10-11 the MESA Panthers U17 girls’ soccer team competed at the Indianapolis College Showcase, beating Midwest United from Illinois in their first game, 3-0. Their next contest was a 3-1 win against the Hoosiers FC Elite Wolves from Indiana before coming back from a 2-0 deficit to defeat Panathinaikos from Missourri, 3-2. — M.S.

FLINT — The Michigan Warriors of the North American Hockey League are currently 6-15-4 after 25 games played this season, leaving the squad in last place in the eightteam North Division behind Jamestown with 34 points, Soo has 31 and Kalamazoo is third with 29. That puts Johnstown in fourth with 28 points, Port Huron has 27 and Springfield and Janesville are tied for sixth with 22.

Last weekend, Michigan took Janesville to a shootout two games in a row at Perani Arena. This includes a 4-3 victory on Saturday after losing by that same score on Friday. Lighting the lamp for the Warriors during their win was Brock LaBelle, Connor Lyons shorthanded and Martin Gruse in regulation and connecting on the extra-session game-winner was Zack Szajner. Netminder Kelley Dillon also went 43-for-46 for Michigan in 65 minutes on the ice to get pinned with the decision. As for Flint’s loss on to Janesville on Nov. 23, it was AJ Marcinek on the power play, Jake Faiella and Szajner with a man-advanatge and an extra attacker during the game’s final minute that handled the evening’s offense. Trevor Gorusch made 30 saves on 33 attempts in goal for Flint, as well.

With former Carman-Ainsworth head coach John Jepson now working as an assistant coach for the Warriors, they’ll start a four-game home-stand on Dec. 7 by hosting Soo and Port Huron will be at Flint on Dec. 8, 14 and 15. — M.S.

FLINT — At Iceland Arena on Nov. 21 the NA3HL’s Flint Junior Generals lost to the Metro Jets 3-1. Scoring Flint’s only goal was Lucas McDiarmid on assists by Timothy Conser and Grand Blanc’s Jacob Howie at 18:31 of the first period to tie the game at 1-

1 and making 33 saves on 36 attempts was goalie Ted Barile. One factor working against the Junior Generals was the fact they were out shot, 36-34, including 15-12 in the first period and 11-8 in the third.

After 19 games played, Howie leads Flint with 13 goals and 13 assists for 26 points, Swartz Creek native Andrew Lay is fourth on the squad with 19 points on six goals and 13 assists and Davison’s Nicholas Goettel is sixth with a goal and 16 assists. Under the direction of Burton product/head coach Steve Howard, The Junior Generals are currently second in the East division with a record of 11-5-2-1, placing them behind Cleveland at 16-3-0-0, but ahead of Toledo, 11-8-0-1, Metro, 9-8-0-0, Three Rivers, 9-8-0-0, and the Michigan Mountain Cats, 6-9-1-0. Flint next hosts Twin City tomorrow at 4:15 p.m. on Saturday the Junior Generals take on Queen City and on Sunday the squad is at St. Louis. — M.S.

Those interested can join the league as a school of six to eight players. Schools can also have more than one team. With each team consisting of an equal mix of boys and girls, or individuals can sign up where they will be put into a team of their own.

To learn more join in on the Free High School Tennis Play Days (match play) and registration events on Sunday, Dec. 9 and 16 from 12-1:30pm at Genesee Valley Sports Center on Hill Rd. Pizza and pop will be provided afterwards and advance registration is required!

The league will begin on Jan 6, 2013 and will run to February 24. All matches will be played on Sundays between 1-5pm.

Each team must be registered before the match days begin on Jan 6 to be put on the league schedule. Players are asked to come to the free play days to register or call Hand, USTA Jr. Team Tennis League coordinator at 810-238-9691 or email cdrahand@yahoo.com. — L.P.