Scoring for Flint was Nicholas Gnagni at 1:52 of the first period with a man advantage on passes from Adrian Larsson and Zachery Hill, Hill then connected at 11:35 of the second on the powerplay with help from Gnagni and Connor McGovern and at 11:30 of the third Eric Jones scored on the assist by Edward Osowski. Austin Fletcher rounded out the offense for the Junior Generals at 14:52 of the third on a pass from Swartz Creek’s Andrew Lay and Anders Franke stopped all 25 of the shots he faced on goal to earn the decision.

Flint also lost to the Metro Jets, 4-2 last Saturday at home, won 5-4 at Queen City on Feb. 20 and defeated Alexandria 3-1 on Feb. 19, at Troy Sports III after besting Minnesota ,7-2 at Iceland Arena in Flint Township, just one night earlier. 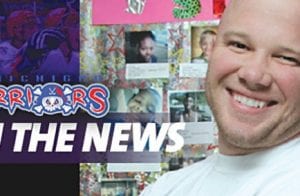 FLINT — The North American Hockey League announced on February 15 that former Carman- Ainsworth/Flushing varsity hockey coach Jon Jepson, who currently serves as an assistant coach with the Michigan Warriors, was named Big Brother of the Year by Big Brothers Big Sisters of Greater Flint in association with the United Way of Genesee County and in celebration of National Mentoring Month. Currently Jepson has been mentoring his little brother Trevor for over two years now.

“I’ve seen many volunteers come and go over the years, but I have never seen one have such a positive impact on my child as John Jepson has,” said Trevor’s Mother, Lisa. — M.S.

Open to one and all

Warriors can’t get past Junior K-Wings

Brock LaBelle knocked home Michigan’s only goal of the game at 6:52 of the second on the Connor Lyons assist, Trevor Gorusch went 27-for-29 on save attempts to get pinned with this decision and Kyle Gattelaro scored the game winner for Kalamazoo at 4:55 of the extra session with help from Robbie Payne.

Last Saturday, the Warriors once again lost to the Junior K-Wings, 2-1 at the Perani Arena and Event Center, in overtime, as AJ Marcinek connected for his squad’s only offense at :23 of the second period with a man advantage on passes from Lyons and Brad Pizzey. Gorusch also went 31-for-33 on save attempts and Kalamazoo’s game winner came from Mike Fazio on the assists by Payne and Sam Johnson.

With 50 games under his belt this season Martin Gruse leads Michigan with nine goals and 22 assists for 31 points, Zack Szajner has 10 goals and 14 assists for 24 points and Lyons has managed 11 goals and 11 assists for 22 points. The Warriors will host Jamestown tomorrow and Saturday. — M.S.