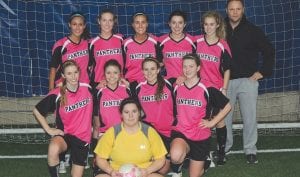 The U17 MESA Panthers won the Michigan Indoor College Showcase.

LANSING — The girls U17 MESA Panthers Soccer Club recently went undefeated at the Michigan Indoor College Showcase in Lansing. The Panthers had wins over Livonia Soccer Club, TNT Dynamite 96 Red, and TNT Dynamite 97 Red. The team played in front of over 17 different colleges that were at the event. After 33 tournament championships and 350 wins, the girls will be going their separate ways after high school. — A.M.

FLINT TWP. — The Bendle/Carman-Ainsworth Adult and Community Education Program will offer kids swimming classes including Baracuda, a Level I program for ages five and up that teaches basic information and skills for $49 from 11-11:45 a.m. Seahorse is a swim class intended for kids ages 3-5 that is designed to build confidence in the water and lay a foundation for aquatic skills from 10:30-11 a.m. for $44. Guppy has a parent/child-based cirrculum that is focused on basic skills and is intended for swimmers six months to three years for $44 from 10-10:30 a.m. and Tiger Shark is a Level 2 experience for kids five and up that teaches skills such as learning to float without support and recover to a vertical position. All of these classes take place from April 13- June 8 on Saturdays.

FLINT — In North American Hockey League Tier III competition the Flint Junior Generals ended the 2012-13 regular season by defeating the Metro Jets, 4-2, on March 5. After Metro scored the games first-two goals, the Junior Generals responded with scores by Nicholas Gnagni on the powerplay at 16:07 of the second period on the assists by Phillip Garza and Conner McGovern and at 16:57 of the second off the stick of Trevor Benaglio with help from Eric Jones and Robert Click.

Swartz Creek native Andrew Lay then connected for Flint on the game-winner at 2:07 of the third on passes by Benaglio and Jones, which Edward Osowski followed with an insurance goal at 13:47 of the third on the assists from Click and Lay. With the win the Junior Generals secured themselves a tie for second place with Three Rivers in the East Division with 58 points, as well as a spot in this year’s postseason against teams such as division rivals Cleveland and Toledo. — M.S.

Cowan, a Grand Blanc native, leads the UMFlint squad with 62 points including 24 goals and 38 assist. Cowan has played in 33 games.

Flint’s Tim Donnelly and Swartz Creek’s Kirk Allen were named to the MCHC All-Conference Second Team. As a defender, Donnelly has 17 points, three goals and 14 assist. Kirk Allen, who plays goalie for UM-Flint, has played in 22 games and recorded a 17-4 record. Allen has a 3.05 goals-against average after facing 566 shots.— A.M.

FLINT — The Flint Semi-Pro Football Organization will be holding a youth football camp on May 25, at 8 a.m. at Atwood Stadium. Registration will begin at 8 a.m. and the camp will begin around 8:30 a.m. The camp is offered to kids between the ages of 7-12 and is free to all participants. Registation will end on March 27. Participants will learn the game of football and get physically fit. Coaches will address the importance of proper coaching, academics, health and safety, and life skills. Details: 810-336-9024. — A.M.