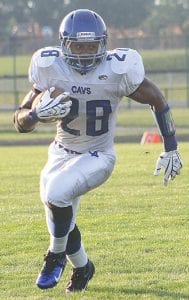 STATEWIDE — Recently www.michiganpreps.com, the in-state affiliate of Yahoo’s www.rivals.com, listed Carman-Ainsworth senior running back Gerald Holmes eighth in its top-10 players rankings for the class of 2013. Holmes is listed as standing in at 6-foot, 205 lbs. and signed his national letter-of-intent to play for Michigan State University this fall on Feb. 5 after visiting the campus in Jan. 18. Also making the list was 6-foot-4, 245 lb. Grand Blanc linebacker Luke Maclean in spot number seven. He will attend the University of Pittsburgh starting later this year. — M.S.

FLINT — Battle Creek’s Cereal Killers will be at the Perani Arena and Event Center to take on the Flint City Derby Girls in their 2013 debut on March 23 at 7 p.m. for $15. Doors actually open at 6 p.m., admission is free for kids 10 and under and parking is $5. Titled Malice in Wonderland, this event is designed to help the Derby Girls, who are now in their sixth year, collect items such as wash cloths, bath towels and children’s socks for the Young Women’s Christian Association’s Women’s Safehouse. Fans that bring these items will receive a raffle ticket. Details: www.flintcityderbygilrs.org. — M.S.

FLINT — The Flint Semi-Pro Football Organization will be holding a youth football camp on May 25, at 8 a.m. at Atwood Stadium. Registration will begin at 8 a.m. and the camp will begin around 8:30 a.m. The camp is offered to kids between the ages of 7-12 and is free to all participants. Registation will end on March 27. Participants will learn the game of football and get physically fit. Coaches will address the importance of proper coaching, academics, health and saftey, and life skills. Details: 810-336-9024. — A.M

GRAND BLANC — On Saturday, May 4, at 9 a.m. there will be a youth baseball camp held at Grand Blanc High School. The camp is open to ages 5-12 and will run until 12:30 p.m. Th cost of the camp is $50 which includes lunch and participants will be taught the five tools of baseball. Throwing/pitching, hitting mechanics, infield/outfield play, catching, and base running will all be focused on. Participants are responsible to bring their own equipment. Details: Contact JD Wheeler at 810-348-2865 or by e-mail at jwheeler@grandblancschools.org — A.M.

JANESVILLE, WI. — The Michigan Warriors gave up three goals in the third period to the Janesville Jets on Saturday, losing, 4-2. The Warriors were up 2-0 in the second period, but couldnt hold on to the lead.

Shawn Badali and Colin Larkin had the goals for the Warriors, while Ryan Dougherty and Jon Farkas had the assists. Dillion Kelley was in net and saved 22 of 25 shots.

In Friday’s game, the Warriors were held scoreless until the third period. The Jets scored two goals each in the second and third periods, proving too much for the Warriors.

The Warriors will face Jamestown on Friday and Saturday, looking to rebound from their two losses to Janesville. — A.M.

Saturday’s game was scoreless until the second period when Zachery Hill found the back of the net for Flint. Three Rivers responded with two goals in the third, but couldnt keep the Jr. Generals from scoring two goals of their own.

Grand Blanc native, Jacob Howie had one goal and one assist for Flint. Andrew Lay of Swartz Creek chipped in with one assist.

On Friday, Flint escaped in overtime with a 4-3 win. Howie scored the game winner to give the Jr. Generals the victory.