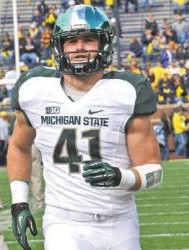 EAST LANSING — The Michigan State Football annual spring game will take place at 2:30 p.m. on April 20. The game will also be televised live on the Big Ten Network. Goodrich grad and fifth-year senior Kyle Elsworth is listed at No. 1 on the Spring Depth Chart at strongside linebacker (SAM). The game is open to the public. — L.P.

Health and fitness for adults

BURTON — The Flint Junior Golf Association will open its online registration Monday, April 8, through Monday, May 13, with play beginning on June 17.

For the second straight year, FJGA will extend an invitation to junior golfers from Holly, Lapeer East, Lapeer West and Brandon high school districts. These schools are under the umbrella of the Flint Metro League.

Online registration will be accepted by logging onto www.fjga.org and following the disrections. Registration forms will also be available at King Par Golf and local participating golf courses. — D.N.

Derby girls back in action

FLINT — The Perani Arena and Event Center will host the Flint City Derby Girls taking on the Down River Dollz from Woodhaven in Women’s Flat Track Derby Association action on April 20 at 7 p.m. Details: www.flintcityderbygirls.org. — M.S.

Warriors season comes to an end

FLINT — In North American Hockey League competition, the Michigan Warriors did not qualify for the 2012-13 playoffs after finishing the regular season in last place in the North Division with a record of 19- 32-9. Individually, it was Martin Gruse who topped the charts for the Michigan offense with 34 points on 10 goals and 24 assists, Zack Sjazner had 13 goals and 19 assists for 32 points and scoring 12 times with 11 assists for 23 points was Connor Lyons. As for the Warriors defense, Trevor Gorusch clocked just over 2,257 minutes in goal during the course of 40 games, going 13-17-6-2 with a 2.56 goals-against average and a .925 save percentage. — M.S.

EVANSVILLE, IN. — On March 23, Carman- Ainsworth grad Glenn Cosey scored several key second half baskets for the Eastern Kentucky University men’s basketball team in the second round of the Collegeinsider.com Postseason Tournament, but it wasn’t enough to keep the Colonels from falling to Evansville, 86-72. For the game the 6-foot, 182 lb. junior went 5-for-10 from the floor, including 4-for-7 from threepoint territory, and hit four of his six free throws to end up with 18 points, three rebounds and two assists.