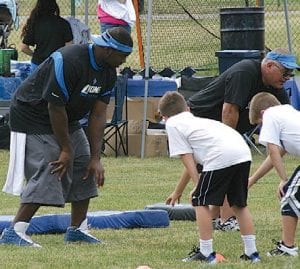 ALLENDALE — Carman-Ainsworth grad Brittney Banister competed for the women’s track and field team at Grand Valley State University at the National Collegiate Athletic Association Div. II Indoor Championships in Birmingham, Alabama earlier this year. Results include a time of 7.63 in the Womens 60m dash prelims on March 7 and on March 8 she ran the second leg for the Women’s 4×400 relay team, which finished in 3:45.58.

Banister, a sprinter, also competed for GVSU at the 2013 NCAA Division II Outdoor Track and Field Championship with the 4×400 relay team that came in sixth and qualified for the finals in 3:44.65. — M.S.

ATLAS TWP. — The University of Michigan Club of Greater Flint has scheduled its Annual Sports Dinner and Golf Day for June 17 at the Atlas Valley Country Club. Golfers must reserve a tee time between 7a.m.-1:30 p.m., payment in full is due by June 10 and only one 18-hole round is permitted because of demand. For those not interested in hitting the links, individuals may gather for socializing and networking at 5:30 p.m., dinner is at 6:30 p.m. followed by a scholarship fund raffle and sponsorships are available starting at $100. Brady Hoke, Red Berenson and David Brandon are tenatively scheduled to attend. Details: 810-732-3000.

GRAND BLANC — The Detroit Lions Summer Youth Football Camp Tour will host a four-day Fundamental Camp at Grand Blanc High School, 12500 Holly Rd., from June 17-20 for boys and girls ages 6-14. Cost is $169 per athlete, camp will focus on fundamentals of every position on both sides of the ball and each clinic is limited to 70 participants. This camp will be conducted by Detroit Lions Director of Youth Football Chris Fritzching and the organization’s youth football coaching staff.

“We work year-round to build a solid curriculum that provides a fun and educational foundation of the game of football while teaching the athlete the benefits of involvement in the game both on and off the field,” said Fritzching. “Skill development, safety and the fun participating within the game is the emphasis at every Detroit Lions Youth Football Camp or Academy we conduct.”

Get back to nature

BURTON — The nature preserve at For-Mar County Park, 2142 N. Genesee Rd., is offering private hikes for non-profits groups for $1.50 per person, classroom field trips are also $1.50 per person and in-school programs have a $50 minimum at a cost of $3 per person, plus mileage. Payment is due day of program, there is a $10 non-refundable cancellation charge and fees vary for specialty programs and workshops.

For-Mar also has stewardship opportunities that include various gardens that are available for adoption at several different locations, as well as individuals willing to do things such as invasive plant removal, greeting people at the visitors center and Bluebird counts. Details: Call 810- 789-8567, 810-736-7100 or 810-789-8568. — M.S.

On the horizon: Youth golf clinics

BURTON — The First Tee junior golf programs, which uses golf as a platform to teach character and life skills, are being offered at IMA Brookwood for boys and girls ages 5-16. Classes start in June, run through July and conclude with a tournament and awards ceremony on Aug. 7 and cost is $95 per student.

Local team done for the year

MT. MORRIS — Having wrapped up its current season on May 18 with their Third Annual Pirates vs. Ninjas event, highlights for the the Mid Michigan Derby Girls Women’s Flat Track Roller Derby team include beating Central MIchigan, 128-83, on April 13. Mid Michigan also lost to the Black Heart Maidens, 333-106 on Feb. 9, on Jan. 13 the squad defeated the Downriver Dollz, 226-46 and on Nov. 10 the Derby Girls opened thier 2-12-13 campaign by downing the Killa Crew, 173-108. Details: www.midmichiganderbygirls.com. — M.S.