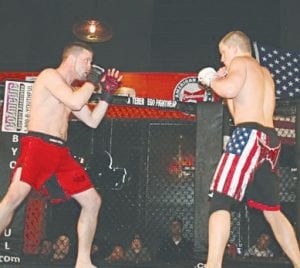 ““We hope this is going to be our biggest (event) so far. It’s the most funded (event) we’ve had and the most support,” said Kombat Promotions owner Matt Rheaume. “As a promotion team we’re growing along with our gym itself, which is Absolute Kombat. We’re really looking forward to a nice show. We’ve got a lot of good, local talent along with talent from across the state.”

ATLAS TWP.— The University of Michigan Club of Greater Flint has scheduled its Annual Sports Dinner and Golf Day for June 17 at the Atlas Valley Country Club. Golfers must reserve a tee time between 7a.m.- 1:30 p.m., payment in full is due by June 10 and only one 18-hole round is permitted because of demand. For those not interested in hitting the links, individuals may gather for socializing and networking at 5:30 p.m., dinner is at 6:30 p.m. followed by a scholarship fund raffle and sponsorships are available starting at $100. Brady Hoke, Red Berenson and David Brandon are tenatively scheduled to attend. Details: 810-732-3000. — M.S.

BRIDGEPORT — The Continental Indoor Football League announced on May 31 that the reigning Champion Erie Explosion will be coming back for the 2014 season along side the Detroit Thunder, Saginaw Sting, Port Huron Patriots and Dayton Sharks.

“The CIFL has been a good fit for the Erie Explosion,” said Explosion owner Bill Stafford. “We are looking to defend our championship in 2014. The CIFL front office staff and other teams have been a pleasure to work with.”

The Thunder are the league’s most recent expansion team and went 4-6 in 2013 while the Sting lost by just a point to the Explosion in the title game. As for the Dayton Sharks, they have a new General manager in LaVar Glover and the Patriots new owner is Jude Carter.

“The CIFL has tremendous stability, professionalism and a vision to provide a platform for players and coaches to advance their professional careers,” said Explosion head coach Shawn Liotta, who won the CIFL’s Coach of the Year award. “We look forward to the challenge of defending our championship against top level competition each week during the 2014 season.”

Return to the great outdoors

BURTON — The nature preserve at For-Mar County Park, 2142 N. Genesee Rd., is offering private hikes for non-profits groups for $1.50 per person, classroom field trips are also $1.50 per person and in-school programs have a $50 minimum at a cost of $3 per person, plus mileage. Payment is due day of program, there is a $10 non-refundable cancellation charge and fees vary for specialty programs and workshops.

For-Mar also has stewardship opportunities that include various gardens that are available for adoption at several different locations, as well as individuals willing to do things such as invasive plant removal, greeting people at the visitors center and Bluebird counts. Details: Call 810-789-8567, 810- 736-7100 or 810-789-8568. — M.S.

DAVISON — The Davison baseball program will be holding its annual T & T baseball camp at the high school baseball field on June 24-27. The four-day camp will focus on the skills of base running, hitting, pitching, catching, outfield play, infield play, bunting and throwing. Players are instructed to bring a baseball glove, baseball shoes, lunch and baseball pants or sweats. Details: Timm Rye, 265-8400. — B.P.

GOODRICH — The Goodrich Girls’ Basketball Summer Skills Camp for girls entering grades 3-8 (fall 2013) will be June 24-27. Registration forms are available on the Goodrich Area Schools website under the Athletics tab and in the offices of each Goodrich school. Details: Coach Davis at 810- 591-2230 or ddavis@ goodrich. k12. mi. us.— D.N

GRAND BLANC — The Detroit Lions Summer Youth Football Camp Tour will host a four-day Fundamental Camp at Grand Blanc High School, 12500 Holly Rd., from June 17-20 for boys and girls ages 6-14. Cost is $169 per athlete, camp will focus on fundamentals of every position on both sides of the ball and each clinic is limited to 70 participants. This camp will be conducted by Detroit Lions Director of Youth Football Chris Fritzching and the organizations youth football coaching staff.