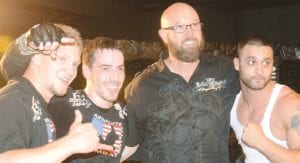 Mitch Rheaume, Sean Cooper, Phil “The Voice” Davey and Steve Lowe stand in the center of the ring after Cooper defeated Eddie Evans at the Polar Palace last Saturday night.

LAPEER — In a journey that included a four-year wrestling career at Grand Valley State University after starting Tang Soo Do classes when he was four years old, Almont native Sean Cooper reached a major milestone last Saturday at the Polar Palace by earning the right to face Flint’s Eddie Evans for the Kombat Promotions amateur mixed martial arts vacant 145 lb. (featherweight) championship. While the fight was a high-energy affair from start to finish highlighted by a multitude of wellthrown combinations and a ground game that featured more ups-and-downs than a ferris wheel, in the end it was Cooper who claimed the three-round unanimous decision.

The co-main event of the night proved to be slightly less contentious as Genesee County native Jerome “Ox” Otler, 16-11, defeated North Branch product Chad Roge at 2:38 of the second round by guillotine choke for the Kombat Promotions vacant 155 lb. (lightweight) championship. Prior to that Guerroro’s teammate Dan Hartman defeated Zac Powers and Andy Trezeszak survived an aggressive slam by Darryl Humphries to grab a first round submission victory by arm bar after several transitions between that move and a triangle choke.

Starting off this card with a third-round submission victory was RJ Sprague over Richard Bastien, which then set the scene for Jorge Arcos’ submission win by triangle choke at 1:24 of the first against Socorroo Guerrero. Kyle Shauffhauser then came out firing against Ben Katzmerk in the third fight of the night before posting a technical knock out at 2:35 of the second and Ace Sears charted a win in a boxing match when Kyle Clowers could not answer the call for the third round. — M.S.

Preparing to come back: Indoor football

BRIDGEPORT — The Continental Indoor Football League announced on May 31 that the reigning Champion Erie Explosion will be coming back for the 2014 season along side the Detroit Thunder, Saginaw Sting, Port Huron Patriots and Dayton Sharks.

The Thunder are the league’s most recent expansion team and went 4-6 in 2013 while the Sting lost by just a point to the Explosion in the title game. As for the Dayton Sharks, they have a new General manager in LaVar Glover and the Patriots new owner is Jude Carter.

DAVISON — The Davison baseball program will be holding its annual T & T baseball camp at the high school baseball field on June 24-27. The four-day camp will focus on the skills of base running, hitting, pitching, catching, outfield play, infield play, bunting and throwing. Players are instructed to bring a baseball glove, baseball shoes, lunch and baseball pants or sweats. Details: Timm Rye, 265-8400. — B.P.

The Crim Fitness Foundation made the announcement at a press conference last Wednesday at Grand Blanc MotorCars.

“It’s an honor for HealthPlus to be so closely associated with the good work of the Crim Fitness Foundation,” said Kathy Bilitzke, public relations manager for HealthPlus. “Our two organizations have a strong tradition of aligned community health goals. With this new agreement, we’re taking our partnership to the next level.”

HealthPlus also announced a new award, the HealthPlus Community Vision Award that will recognize an individual whose dedication, time and talent has positively impacted a community’s health and wellbeing.

Other changes to the race schedule include moving the Michigan mile race to Friday night, Aug. 23, while the 10-mile signature race remains on Saturday, Aug. 24. The health expo begins on Thursday, Aug. 22.

Registration and race details, including new race course maps, are available at . — L.P.