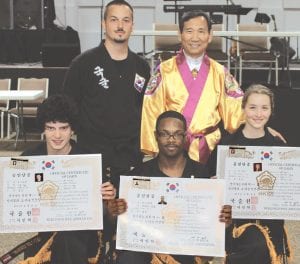 BOSTON, MA — Carman-Ainsworth grad Jonathan Lee recently completed his senior season for the men’s basketball team at Northeastern University averaging 13.8 points, 4.4 rebounds, 4.0 assists and 1.8 steals per contest in 24 games played. Having missed the first nine games of the 2012-13 season because of a pre-season injury after being named to the Pre-season All Colonial Athletic Association First Team, Lee broke out against the University of North Carolina-Ashville in his first game back with a 19-point performance.

“I’m very proud of them for all that they accomplished.

These three are some of the best, and they worked very hard to achieve this level,” said Sa Bum Nim/Head Instructor Kenneth Wright. “I’m looking forward to sharing the next level of their training with them, because in Kuk Sool Won, Black Belt is just the beginning.”

Hosting this event was Kuk Sool Won Founder Grandmaster In Hyuk Suh and instructors included Texas natives Barry Harmon, a 9th Degree Master, and 8th Degree Master Sung Jin Suh. There were also more than 50 students on hand, 33 of which are from Burton and the surrounding area. Details: (810) 908-2659, kdwflint@aol.com or kswflint.com — M.S.

Now accepting applications to be an athletic official

EAST LANSING — The Michigan High School Athletic Association is currently accepting applications online and by mail for the 2013-14 school year for game officials. The MHSAA is also hoping to further the program it began last year designed to recruit graduating seniors by offering those selected an exemption on registration costs for the upcoming school year, as well as help touching base with area officials’ groups regarding training prospects.

For returning and other first-time officials, those registering online will get $5 off, there is a $12 fee for each sport and the online processing fee is $30. There’s also a $30 late fee for registering after July 31, an officials’ registration test for firsttime officials and officials who were not registered during the past school year is required and the processing fee includes liability insurance coverage up to $1 million for officials while employed at a game for the MHSAA.