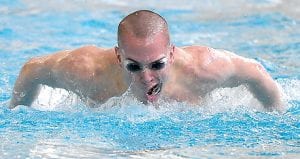 HOLLAND — Former Carman-Ainsworth swimmer and current Hope College sophomore Erik Skaff was named to the Michigan Intercollegiate Athletic Association 2012-13 Academic Honor Roll on July 5. In order to qualify for this award studentathletes had to keep a 3.5 grade-point average for the year. — M.S.

OOST-VLAANDEREN, Belgium — Former Carman-Ainsworth track and field athlete and Xavier College product David Gibson competed for Athletes in Action on July 6 in a Flanders Cup event known at the 22th Memorial Leon Buyle. Results for Gibson include placing third out of eight in the long jump with a personal best of 23- feet, 11-inches. — M.S.

FLINT — The Opening Ceremonies for the 57th Flint Olympian Games took place on July 9 featuring Olympic Gold medalist Claressa Shields at Guy V. Houston Stadium after starting the day at Northwestern High School for the event’s Physical Fitness Walk. Upcoming events include the Adult Golf Qualifying Tournament tomorrow at Brookwood Golf Course in Burton at 10 a.m., with a $10 fee and cart fee of $16, and the Genesee Sportman’s Club, 8208 North Seymour Rd., in Flushing is hosting the sporting clays/traps on Saturday from 10 a.m.- 2 p.m.

The weightlifting competition will then take place at Flint Southwestern Academy on Monday and Houston Stadium at Northwestern will host the field events on Tuesday and the running events on July 18 starting with registration at 5:30 p.m. followed by the competition from 6-8 p.m. Details: http:// canusagames. weebly.com/ or fax 810-422- 0216. — M.S.

Derby Girls back on the track

FLINT — The Flint City Derby Girls take on the Small Town Outlaws of Kalkaska on Saturday, July 13, at Kalkaska. Flint City touts itself as the premier women’s flat-track roller derby league in Genesee County. Tickets are available at flintcityderbygirls.org and Ticketmaster— L.P.

On the other side of the river

HAMILTON, Ontario — Bernie Arbour Stadium will host the Opening Ceremonies for the 56th CANUSA Games on Aug. 9 starting at noon. The festivities continue on Aug. 10 with a format that includes the Mayors of Flint and Hamilton competition followed by the CANUSA Closing Ceremonies on Aug. 11 at Mohawk College starting at 9 a.m. with a Program and Trophy presentation.

There will also be a Greater Flint Olympian CANUSA Games Association golf outing on July 26atIMABrookwoodthathasa9a.m.shotgun start and costs $80 per person. All of this will be preceded on July 25 in Flint at First Presbyterian Church, 746 S. Saginaw St., by the Flint Olympian and CANUSA Games Appreciation and Recognition Dinner. Reception is at 5:30 p.m., dinner will be served at 6 p.m. and the awards and recognition program will take place at 7 p.m. RSVP at 810-760-5252. — Details: www.canusagames.com or e-mail flintcanusa@flintschools.org. — M.S.

MT. MORRIS — July 27 marks the return of the Warrior Dash, mud-crawling, fire-leaping, extreme 3.25 mile run. Runners will have to conquer 13 extreme obstacles. Waves of up to 300 runners take off from the start line every half hour starting at 9 a.m. The race takes place at the E.A. Cummings Center in Mt. Morris. To register or for details: www.warriordash.com. — L.P.