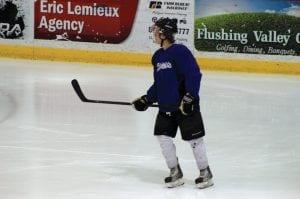 One of several hundred players goes through a drill during the Warriors’ tryouts at Flint Iceland Arenas last Thursday.

FLINT — Flint’s Iceland Arena played host to the Michigan Warriors main tryout camp last week, which began on Tuesday and came to its conclusion on Sunday. The Warriors, a junior hockey team in the North American Hockey League, are entering their fourth year in Flint after relocating from Marquette and are looking to rebuild some of their roster after missing the playoffs for the first time in team history last season.

“We’re looking for young men of strong moral character who want to work hard and take their careers to the next level,” Warriors coach and general manager Moe Mantha stated in the team’s official press release prior to the camp. “We’ve graduated players to (National Collegiate Athletic Association) Div. 1 and NCAA Div. 3 college hockey clubs from our roster each of our three years in the league. We expect a high level of competition for our open roster spots and feel that will help us put on a great show for the fans this fall.”

The turnout for the camp was so extensive that the Warriors coaching staff was forced to take all of the returning players and prospects and divide them into eight teams in order to get an even look at all players involved. Sunday’s camp finale featured the all-stars of the tryouts in a final contest. — L.P.

Hitting the next level

DAVISON — The Davison varsity and JV cheerleaders will be holding their first-ever summer camp, which will be held at Davison High School’s gym on August 12-13, with sessions lasting from 10 a.m.-4 p.m. Girls ages 5-14 are welcome to attend the camp, which consists of two days of instruction, including chants, cheers, stunts, gymnastics, cheer dance and buddy time, a camp outfit and a stage performance. Lunch will be provided on the second day. The camp is $50 per child with a registration deadline of July 19.

The cheerleading program is also hosting several other fundraisers, including a bottle drive on July 26 and August 27 from 11 a.m. until 12 p.m. at the Davison Meijer. On July 21, the squad will be at Davison’s Tropical Smoothie Cafe where 20-percent of all sales will be donated to the cheer program. Also, on July 19, the cheerleaders will serve food at Archie’s restaurant in Davison from 4:30 p.m. until 7 p.m. Details: nnivison23@gmail.com. — B.P.

MT. MORRIS — This Saturday marks the return of the Warrior Dash, a mud-crawling, fire-leaping, extreme 3.25-mile run. Runners will have to conquer 13 extreme obstacles. Waves of up to 300 runners take off from the start line every half hour starting at 9 a.m. The race takes place at the E.A. Cummings Center in Mt. Morris.

“We typically do not sign multi-year agreements, but because the team at Genesee County Parks has been so great to work with, and our participation levels have consistently risen, we decided to make an exception. We are excited to partner with GC Parks through 2014 and we hope that we can continue to call GC Parks home of the Warrior Dash Michigan event for years to come,” said Warrior Dash representative Michael Coco.