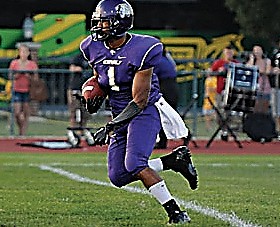 Carman-Ainsworth graduate Will Cummings finished his collegiate football in the 2012-13 season.

BOURBANIS, Ill. — In his final season playing defensive back for Olivet Nazarene University, Carman-Ainsworth product Will Cummings started seven of the eight games he took the field for in 2012-13. Results included 32 total tackles (20 solo, 12 assist) for a team that went 3-8 overall, 1-5 Mid-States Football Association-Midwest. — M.S.

NINOVE, BELGIUM — Having just completed his senior season competing for the men’s track and field team at Xavier University in Ohio, former Cavalier David Gibson is currently participating in the Flanders Cup in Belgium. As a member of the team representing Athletes in Action, an organization that uses sports to help people deal with faith-based issues, Gibson competed in the long jump at 23th Memorial Rasschaert on July 27, placing fifth with distances of 7.10m and 6.98m. — M.S.

FLINT TWP. — The Great Lakes Cyclones 12U travel baseball will be hosting tryouts August 3-4 from 3-5 p.m. and August 7 from 6-8 p.m. at Carman-Ainsworth middle school, 1409 West Maple Avenue in Flint. The team will be playing in the Greater Flint Baseball League in the summer of 2014 and four or five local tournaments. This also includes two sessions of indoor baseball during the winter. — L.P.

HAMILTON, Ontario — Bernie Arbour Stadium will host the Opening Ceremonies for the 56th CANUSA Games on Aug. 9 starting at noon. The festivities continue on Aug. 10 with a 1,500-meter run between the mayors of Flint and Hamilton. The CANUSA Closing Ceremonies are on Aug. 11 at Mohawk College starting at 9 a.m. with a Program and Trophy presentation. — Details: www.canusagames.com or e-mail flintcanusa@flintschools.org. — M.S.