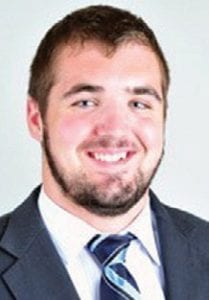 FLINT TWP. — In the Aug. 8 edition of the Flint Twp. Sport Shorts the names of Cameron Stover and Devon Simpson were incorrectly placed below the photos. We apologize for the error. — L.P.

YPSILANTI — With their season slated to kickoff on Aug. 31 at home against the Howard Bisons, Eastern Michigan University will be looking for big things this season from Carman- Ainsworth grad and redshirt junior Bobby McFadden. As a 6-foot- 7, 303 lb. offensive lineman, McFadden played in 11 games last season and started nine for the Eagles, 2-10 overall, 1-7 Mid-American Conference. After getting redshirted as a true freshman in 2010, the former Cavalier came back in 2011 to play in nine games for EMU while also earning an Academic All-MAC honorable mention designation. — M.S.

Youth gridiron action coming up on the slate

FLINT TWP. — Upcoming events in preparation for the 2013 Mid Michigan Rural Football League includes Field Commissioner Training from 9-11 a.m. today at Fenton High School and on Aug. 24 at the Holly and Millington multi-team scrimmages. There is also a mandatory coaches meeting on Aug. 20 at Mt. Morris High School from 8-10 p.m. preceded at 7 p.m. by pre-roster meeting. Aug. 17 is the first day contact practices are allowed and Kearsley will host a multi-team scrimmage on Aug. 24 starting at 10 a.m. Details: www.mmrfl.org. — M.S.

GRAND BLANC — Family Promise of Genesee County is sponsoring a 5K Run/Walk on Sept. 7 at Genesys Health Park’s walking trail. Entry fee is $25 including a T-shirt if registered by Aug. 30. Children 10 and under are free, and strollers are welcome. Family Promise is an interfaith organization dedicated to keeping homeless families together during temporary periods of homelessness. Details: www.familypromiseofgc.org. — D.N.

Hit the ice for no cost

LAPEER — The Lapeer County Hockey Association is currently taking registrations for the fall season of 2013-14. Evaluation skates will take place August 20-22 at the Polar Palace. Registration can take place at the arena or on the arena’s website. Details: polarpalace.com. — B.P.