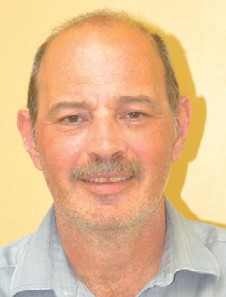 LAPEER — The View Newspaper Group and County Press welcomes Keith Warvie to its award winning sports staff. Warvie, a Capac native, joined the staff in August after spending several years at various papers including the Voice in Chesterfield, the Daily Mining Gazette in Houghton, the Messenger in Madisonville, Kent., the Cheboygan Tribune in Cheboygan, the Elko Daily Press in Elko, Nev., the Sault Evening News in Sault Ste. Marie and the Russell Daily News in Russell, Kansas.

“Warvie’s passion for sports, especially at the high school level, makes him a valuable addition to our staff,” said VIEW Sports Editor Lisa Paine. “His nearly 20 years with community newspapers fits our niche and growing and expansive sports coverage throughout our community papers in Lapeer and Genesee counties.”

“It’s kind of nice to be home,” said Warvie. “I am really looking forward to visiting some familiar old haunts.

“I’m just looking to do my part and to become a valuable addition to this fine staff.” — L.P.

CLEVELAND — The Flint Junior Generals of the North American Tier III Hockey League began thier 2013-14 season by wining at the Cleveland Junior Lumberjacks, 7-2, last Saturday. The difference was the five-straight goals Flint scored in the second period after ending the first tied at 2-2. Scores came from Nicholas Gnagni shorthanded at 3:57 on the Andrew Bellant assist and Jacob Lainesse at 6:40 with help from Austin Flecther and Chris Skordilis. In goal for the Junior Generals, Anders Franke made 28 saves on 30 attempts to get the decision. Sunday, Flint lost a shootout at Cleveland, 7-6.

The Junior Generals, 1-1 overall, are at the Lakeland Ice Arena on Saturday to face the Metro Jets and on Sunday the squads will play the rematch at Perani Arena. — M.S.

GENESEE COUNTY — The Michigan Warriors started the 2013-14 North American Hockey League pre-season yesterday at Perani Arena against the Brookings Blizzard prior to traveling to face the Minnesota Magicians today and the Austin Bruins tomorrow. Upcoming events for the Warriors include free admission to the Dec. 6 game at 7 p.m. against the Port Huron Fighting Falcons. Fans can get up to four tickets at no cost at the Perani Arena box office and on Dec. 20 individuals can get as many as two kids tickets for free with a paid adult admission. Details: http:// mywarriors. co/. — M.S.