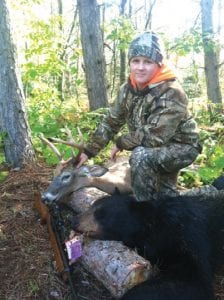 ALPENA COUNTY — Carson Turnbow, 12, of Burton and a seventh-grader at Goodrich Middle School, had a successful weekend of hunting in Alpena County. On September 20, the opening day of bear season, he bagged a 200 pound black bear. On September 21, the opening day of the Liberty hunt, he bagged a 6-point buck while accompanied by his grandpa, Jeff Murphy. Special thanks to his great grandma Bonnie for the opportunity, as her permit was transferred to her great grandson. — L.P.

BURTON — On October 26, the Carman- Ainsworth Athletic Hall of Fame will induct Scott Faculak from the 1991 track and field and ski race teams, Jim Featherstone from the 1982-83 track and field squads and 1982 wrestling and football standout Scott Savoie. Mona Wirostek- Ward will also join the Carman-Ainsworth Hall of Fame for her work with the track and field, volleyball and speedball teams as will the 1969 and 1975 football teams and Louis Schlosser for his 1964 Special Services Award. The banquet begins at 4:30 p.m. at the Holy Redeemer Life Center, 1227 East Bristol Road, and tickets are $40. Details: dbalbaug@grandblancschools.org. — M.S.

PORT HURON — The Michigan Warriors of the North American Hockey League lost at home on Saturday to Port Huron 4-2 after winning at the Fighting Falcons, 5-4 last Friday. Michigan, 3-3-0, also defeated Minot, 3-0 ,on Sept. 21 and is at Janesville tomorrow and Saturday before starting a six-game home stand on October 9, 11 and 12 against Port Huron and Johnstown, respectively. — M.S.