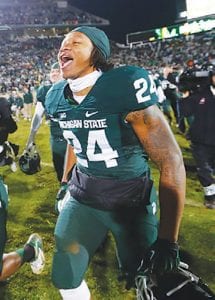 EAST LANSING — Carman-Ainsworth grad and Michigan State redshirt freshman Gerald Holmes was the first running back selected in MSU’s annual spring game draft on April 23. Holmes was a member of the victorious White squad, which defeated the Green 20-13.

Holmes is currently sitting at No. 4 on the spring depth chart at the tailback position. He tallied 20 yards on four carries. The 6-foot, 216-pound back, is behind returning seniors Jeremy Langford and Nick Hill and sophomore Delton Williams. Holmes was named Scout Team Offensive Player of the Week twice last season. — K.W.

FLINT — The University of Michigan- Flint’s vintage baseball team is returning for a second season and is looking for players to join the team.

Each year over 25 teams take to fields all over Michigan dressed in period uniforms, using replica equipment, and playing by the rules of the 1860s to recreate the earliest days of America’s past time.

For the second year in a row, UM-Flint’s Department of History and Whaley Historic House Museum are sponsoring a team. Practices have already begun for the team and are open to anyone who is interested in joining the team.

“If you enjoy playing baseball and have an interest in the game’s history then you would love playing vintage baseball,” Wyatt Professor of U.S. History Thomas Henthorn said.

FLINT — The Warriors defeated Port Huron 4-0 on Saturday to clinch the North Division title. The Warriors won three straight in the series with Port Huron, TJ Stuntz scored twice for the Warriors.

Tyler Groat and Zach Szajner had a goal each. Trevor Gursuch picked up the win in net. He allowed just two goals in the series.

The Warriors’ next opponent has yet to be determined because the teams will be reseeded once this round ends. — K.W.

BURTON – IMA Brookwood Golf Club has scheduled a Family Golf Day on Saturday, May 10, from noon-3 p.m. The event is free for the entire family.

The day will include Golfzilla, a 25-foot dinosaur that kids can hit golf balls at, the Dennis Walters Golf Show, and stations that include free golf lessons, SNAG Golf, a putting green course, chipping and bunker station, a fit and fun zone with a bounce house, and a lunch area. Details: www.brookwoodgolfclub.com. – D.N.