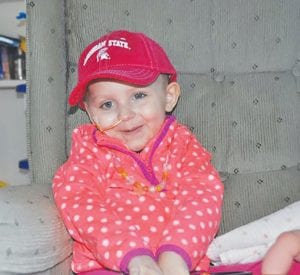 The “Believing in Bella” Fundraiser is Dec. 6.

FLINT — The University of Michigan-Flint men’s Hockey team is teaming up with the University of Michigan-Flint women’s hockey team to put together a benefit fundraiser; “Believing In Bella,” sponsored by General Motors Flint Operations at Crystal Fieldhouse Ice Arena. Proceeds will go to 3-year-old Isabella Ward who has Retinoblastoma, a rare cancer of the eye. Her cancer has spread to her pineal gland in her brain and also her spine. If you click on this link www.youcaring.com/medical-fundraiser/believe-inbella/ 128022 it will give you her whole story.

The “Believing in Bella” fundraiser will be held at the UofM Flint Hockey teams’ home ice rink, Crystal Fieldhouse in Burton on Saturday, Dec. 6. The University of Michigan Flint squads will face the University of Michigan-Ann Arbor’s D3 Club team with the doors opening at 6 p.m. and puck drop at 7:30 p.m.. This will be the very first time UM-Flint will play UM-Ann Arbor.

ANN ARBOR — Former Carman-Ainsworth player Anton Webster had five points, three rebounds and one assist in UD-Mercy’s 71-62 non-conference loss to Michigan last Thursday. Webster, a junior this season, made both of his field goal attempts for the game. — K.W.

DAVISON — The catholic community of St. John & Blessed Sacrament will be holding a youth basketball camp on Jan. 10 and a seven-week youth hoops’ league beginning on Jan. 17. The camp is intended for kindergarteners through third graders and will take place at St. John Family Center at 505 N Dayton St. in Davison. Early registration ends Nov. 24 and registration as a whole is completed on Dec. 20. Details: 810-652-0304 or visit stjohndavison.org. — B.P.

Hall of Fame tickets sold out

GRAND BLANC – Tickets for the 35th annual Greater Flint Area Sports Hall of Fame induction banquet are sold out. The Class of 2014 will be enshrined Dec. 6 at the Genesys Athletic Conference and Banquet Center, 805 Health Park Blvd., Grand Blanc. Doors open at 3:15 p.m. for a social hour, and the program begins at 4:15 p.m. with dinner followed by the induction ceremony.