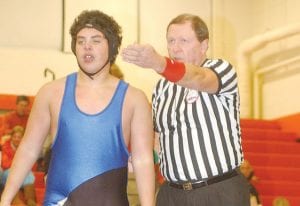 The Cavaliers hosted a Big Nine quad meet last Wednesday and wrestled Davison and Powers Catholic. The team traveled to Allen Park on Saturday. Carman-Ainsworth will travel to Davison tomorrow to participate in the Big Nine Meet and prepare for districts next week. — E.H.

FLINT — The 28th Annual EMHA Mite hockey tournament has been booked for March 4-6 at Iceland Arenas. Divisions include Mite AA, Mite A, Mite B, Mini-Mite and Cross-Ice. Teams are guaranteed four games, there is no gate admission and no curfews. Championship team and all finalists will receive awards and MVP awards and tournament gifts are provided. This is a USA Hockey and MAHA sanctioned tournament. Cost is $875 per team and must be paid by Feb. 1, $895 after Feb. 1. Final registration deadline is Feb. 14. Details: Jim Hammond, 810-287-9931. — L.P. 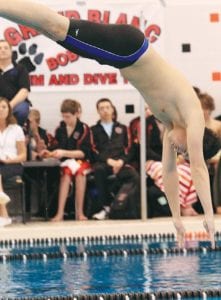 Cavaliers in the lane The Flushing/Carman-Ainsworth swim and dive team had several recent meets, going up against Flint Kearsley on Jan. 25 and Flint Powers on Jan. 27. Results were not available as we went to press. Above, Brian Mendoza entered the water in the one meter diving event at the recent Genesee County Meet. — L.P.

Last Friday, Michigan and Motor City started this two-game-affair with a much more tightly contested matchup that was scoreless at the end of the first period before the Warriors struck twice in the second and then held on for the 2-0 win. Tickling the twine for Michigan was Andrew Kolb at 6:21 on the Henegar pass followed by Gruse at 13:20 unassisted. In goal Tadazak stopped all 33 shots he faced to earn the decision. With these victories the Warriors are now 22-12-4 for 48 points, placing them fourth in the nine-team North Division behind St. Louis at 29-9-4 (62), Janesville at 26-11-3 (55) and Traverse City with a mark of 24-12- 1 (49). Michigan is at Traverse City tomorrow at 7:05 p.m and hosts Chicago on Feb. 11 at the Perani Arena and Event Center at 7 p.m. — M.S.

Ice legends Peggy Fleming, Dorothy Hamill, Scott Hamilton, Brian Boitano and Michelle Kwan serve as the storytellers for the film, and Evan Lysacek has signed on as the spokesperson.

The event will be broadcast live from the Best Buy Theater in New York City’s Times Square to over 500 movie theaters nationwide at 8 p.m. Pre-show features will begin 30 minutes prior to the start of the event. Locally, the film will be shown at Showcase Cinemas Flint West, 1591 S. Graham Rd. — D.N.

BURTON — The annual Gus Macker 3-on- 3 basketball tournament has been moved to June 25-26 at the Courtland Center Mall parking lot area. This is the fifth year for the Macker in Burton and the organizing committee is seeking sponsors, volunteers and vendor help. To sign up for this year’s tournament log on to www.macker.com. To volunteer contact 810-743-1500. — L.P.

Time to hit the links

BURTON — The IMA Brookwood Golf Club, 6045 Davison Rd., is hosting its sixth annual Wine, Women and Chocolate event on Feb. 12 from 1-6 p.m. and a $50 advanced registration is required. Offerings include a 5k snowshoe, cross country ski and walking course featuring hospitality tents with hot chocolate, coffee, tea, cookies, fruit, soup, chocolate and wine. Participants must be 21 and wine tasting begins at 2 p.m. Also available is a Women’s Warm Up from 9-11 a.m. for $20 that is open to women of all ages. Details: dwojo@imarecreation.org or 810-249-7060. — M.S.

On your mark, get set, go

In the final stretch