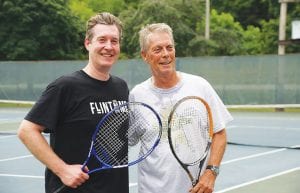 HAMILTON, Ontario – Flint won the 58th CANUSA Games that pits Flint athletes against those from Hamilton, Ontario. The venue trades back and forth each year and was in Hamilton this year. Flint won 8-6 and Flint Mayor Dayne Walling once again entered into the Mayor’s Competition against Hamilton Mayor Fred Eisenberg. This year’s event was tennis and Eisenberg won, 1-6, 6-0, 6-0. Sports offered include baseball; basketball, bowling, darts, flag football, gymnastics, ice hockey, skeet, soccer, softball, swimming, tennis, track and field, triathlon/torch run. Golf was not available this year, but will return in 2016. The overall record between the two cities has Flint with 28 wins to Hamilton’s 26. There have been four ties over the 50-plus years of the games. Details and full results: www.canusagames.weebly.com. – L.P.

FLINT — Mott Community College is set to host a one-day softball camp for girls in grades 5-12. The camp will take place on Saturday, Aug. 22 at the Mott softball field on Nebraska Street, just north of Mott’s Flint campus.

There will be a pitching clinic from 9-11 a.m. and a catcher’s clinic from 10 a.m.-noon. The skills clinic will run from 1-4 p.m. and consists of hitting, fielding and throwing.

Discount rates are available for those attending both the morning and afternoon sessions and a free lunch will be included. Details: Rod Studaker at 989-860-3931 or studakerrod@gmail.com. — L.P.

The duo is teaming up with Aqua Club’s very own two-time Olympic swimmer, Nimrod Shapira. Shapira, representing Israel at both the 2012 and 2008 Olympic Games, is also the founder of AquaClub, and spends much of his time coaching AquaClub’s competitive team.

The event is open to children of all ages and swim levels. Cost: $99. Check-in 7:30 a.m. at the Oxford High School Natatorium. The event will include a two-hour swim clinic. The day will include a special presentation by Giles Smith, along with an afternoon full of friendly competition, encouragement and support during a Sprint Challenge. Details: 248-420-8064; or e-mail info@aquaswimclub.com. – L.P.

Early packet pick-up will be available on September 23 from 5-7 p.m. at Complete Runner located at 915 S. Dort Highway in Flint. Packet pick-up the day of the race and late registration will take place at IMA Brookwood Golf Club beginning at 4 p.m. Details: Lisa Ray at (810) 742-2169, e-mail lray@imarecreation.org or go to the race website at www.brookwoodboogierun.com. — K.W.

GRAND BLANC – The Greater Flint Area Sports Hall of Fame has announced the three teams to be inducted in this year’s class.

The 1962-65 St. John Vianney golf teams will be inducted as one entry for winning three state championships while compiling an 89-7 dual meet record in that four-year span.

Those teams, along with seven individuals, will be inducted on Dec. 6 at the Genesys Conference and Banquet Center. The individual selections will be announced at a press party on Oct. 7.

Further information about the induction banquet, along with the history of all 35 previous banquets, can be accessed at www.gfashof.org. – D.N.