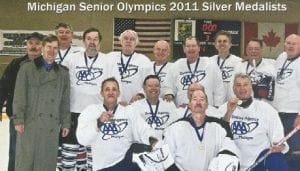 Team members include John Bishop of Attica, Bill Gibbons and Doug Francek of Lapeer, Jerry Paga of Dryden, Tom RaCosta of Columbiaville, Bruce Bergum and Jim Layman of Davisburg, Dave O’Connel of Birch Run, Bill Richards and Rob Hill of Goodrich, Paul Busque and Mike Owens of Flint, Bill Abdella of Davison, Brad Kelly of Swartz Creek, Ron Olinick of Clio, Ward Clarkson of Corunna and Bill Dunckley of Grand Blanc. Francek said the highlight of the tournament was having hockey legend Ted Lindsay present the team with its medals and chat them up in the locker room. He’s near the front row in the trench coat. Lapeer beat the OPC Mavericks, 1-0, Team Bruno, 2-0, tied with the Sting, 1-1 and Westbrook, 1-1, then lost to Fisher and fell out of the finals, 3-0. — L.P.

MT. MORRIS — The Mid Michigan Derby Girls, with players from all over Greater Flint and Lapeer County, invite the public to its game on Saturday, Feb. 19 at Skateland Arena, 8460 N. Dort Highway at 6 p.m. The Derby Girls take on the Lansing Mitten Mavens in a joint effort to raise funds for the non-profit Shelter of Flint and Team Wii.

The good old fashioned roller derby match will help homelessness in the area and support Team Wii, a cycling team that is raising awareness for the fight against cancer.

Advanced tickets are $6 and are available from team members, at Skateland, at the Locker Room in Davison or online at www.midmichiganderbygirls.com. Tickets at the door are $8 and kids under the age of 12 are admitted for free. — L.P.

FLINT — The Crim Festival of Races will mark its 35th year this August when the race hits the bricks of Saginaw Street. Online registration is open until April 1 with the online fee waived for all meeting the early deadline. Details: www.crim.org — L.P.

FLINT — The 28th Annual EMHA Mite hockey tournament has been booked for March 4- 6 at Iceland Arenas. Divisions include Mite AA, Mite A, Mite B, Mini-Mite and Cross-Ice. Teams are guaranteed four games, there is no gate admission and no curfews. Championship team and all finalists will receive awards and MVP awards and tournament gifts are provided. This is a USA Hockey and MAHA sanctioned tournament. Cost is $875 per team and must be paid by Feb. 1, $895 after Feb. 1. Final registration deadline is Feb. 14. Details: Jim Hammond, 810-287- 9931. — L.P.

Ice legends Peggy Fleming, Dorothy Hamill, Scott Hamilton, Brian Boitano and Michelle Kwan serve as the storytellers for the film, and Evan Lysacek has signed on as the spokesperson.

The event will be broadcast live from the Best Buy Theater in New York City’s Times Square to over 500 movie theaters nationwide at 8 p.m. Pre-show features will begin 30 minutes prior to the start of the event. Locally, the film will be shown at Showcase Cinemas Flint West, 1591 S. Graham Rd. — D.N.

BURTON — The annual Gus Macker 3-on-3 basketball tournament has been moved to June 25-26 at the Courtland Center Mall parking lot area. This is the fifth year for the Macker in Burton and the organizing committee is seeking sponsors, volunteers and vendor help. To sign up for this year’s tournament log on to www.macker.com. To volunteer contact 810-743-1500. — L.P.