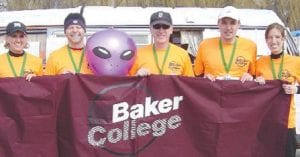 DEARBORN — Five employees of Baker College won the Invasion of the Martians Marathon Relay on April 2, beating 19 other teams. The five legs varied in length from 4.5 to 5.6 miles. Baker won with a 3:21:20 for the 26.2-mile course. Bradford United was second behind Baker trailing by 17 minutes, 9 seconds. Picured l-r are: Maureen Parmann of Port Huron, Steve Peterson of Lincoln Park, Mike Heberling of Grand Blanc, Tom Miller of Waterford and Becky Richardson of Flint — L.P.

Cost is $150 per team (15 players), with an additional $15 per extra player, and includes a T-shirt and other items supplied by sponsors. Teams are guaranteed four games. Campers must be enrolled in high school to participate. Registration deadline is June 1.

The third annual Brandon Carr Golf Scramble will be June 25 at Sugarbush Golf Club in Davison. Cost is $85 per person and includes golf, cart, lunch at the turn, and a dinner reception with awards and prizes and words from Carr. Details for both events: Tawana Branch at 810-210-6929 or asportsmom@comcast.net. — D.N.

Lacrosse clinics underway through May 20

FLINT — A lacrosse clinic featuring Brian Bader of Perani’s Hockey World and Jon Jepson, GM at Iceland Arena kicked off April 1 and runs every Friday through May 20. The eight-session clinic is geared for 10-andunder, 11-14 year olds and 15 and up players. The emphasis is on learn to play. Cost is $100 per person and each person receives a keepsake lacrosse jersey and a pizza party at the close of the clinic. Registration takes place at Iceland Arena on Elms Road and anyone providing their registration receipt at Perani’s Hockey World, 3600 Dort Highway, gets 20 percent off a one-time purchase of lacrosse gear. — L.P.

Spring hockey and lacrosse on the offering

FLINT — Iceland Arena on Elms Road is offering spring hockey and lacrosse April- June. Rent one hour of ice and receive one hour of field time for each hour booked. A free one-hour introductory lacrosse clinic is provided for each participating team. Stick rental available for $2. The Field is also available for straight hourly rentals at special pricing for the Spring 2011 season. Details: Jon Jepson, 810-635-8487. — L.P.

BURTON — The annual Gus Macker 3-on-3 basketball tournament has been moved to June 25-26 at the Courtland Center Mall parking lot area. This is the fifth year for the Macker in Burton and the organizing committee is seeking sponsors, volunteers and vendor help. To sign up for this year’s tournament e-mail burtonmacker@comcast.net. To volunteer contact 810-743-1500. — L.P.