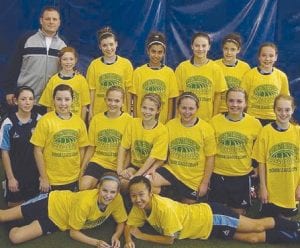 GENESEE COUNTY — The U12 MESA Blitz soccer team won back-to-back league championships at the Genesee Fieldhouse this winter. The team dominated Session II, finishing with an 8-0-0 record, scoring 68 goals and allowing only four, finished on top with a 6-1-1 record in Session II. This is the team’s sixth indoor title and 16th championship. The team has been accepted to the Michigan State Premier Soccer League for the fall 2011 season and will be looking to add up to five players, including a full time goal keeper. Tryouts for the U13 premier team will be held on Saturday June 18 and Monday June 20. Details: www.mesablitz.com or contact Coach Brian Riley at (810) 908-1112. — L.P.

FLINT — Greater Flint area softball is currently searching for players for an 18 & over womens’ fast pitch softball league for this summer. The season starts on July 11, and wraps up on August 15. Games will be played at Whaley Park. The fee to play is $300 per team, and $20 per game to pay the umpires. Balls will be provided. Each team must provide their own T-shirts. Details: Rachel Martinez at 810-265-0080. — B.P.

GENESEE COUNTY — The Genesee Fieldhouse, 7383 Grand Parkway, is hosting a free soccer clinic on Saturday for boys and girls 8-14 years old from 10:15-11:30 a.m. featuring English Premier League coach Dave Fitzgerald of the Bolton Wanderers. The clinic is open to the first 60 athletes that sign up in advance and all players will receive a free T-shirt along with coaching that is specific to the Bolton Wanderers Academy Curriculum. Details: tony@midwestsoccer.net or 810-714-5575. — M.S.

PORT HURON — Alan Sharp of Flint was one of several SC4 basketball players honored at the school’s awards banquet. Sharp was named to the MCCAA All Defensive Team, made MCCAA Third Team, was Co- MVP and Co-Best Defender. — L.P.

EAST LANSING — The Michigan State football team conducted its spring game last Saturday at Spartan Stadium with the Green beating the White, 24-10, with senior quarterback Kirk Cousins leading the Green. Also taking part were local products Kyler Elsworth, a walk-on freshman from Goodrich last year who played in 13 games as part of the special teams, and North Branch grad and current junior Zac Heuter, who had yet to play a game for the Spartans because of shoulder injuries and surgery. Elsworth, No. 41, had four solo and two assisted tackles for the white squad, while Heuter, No. 3 on the depth chart at right guard got some starting time for the Green. — L.P.

Run for the roses Saturday

LOUISVILLE, KY. — Horse racing fans will want to tune into NBC Saturday for the 137th annual running of the roses, otherwise known as the Kentucky Derby. Post time is 6 p.m. — L.P.