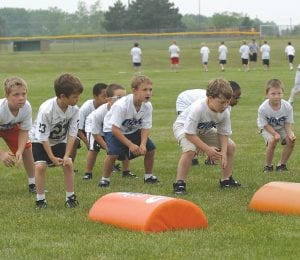 Youngsters learned how to get into the down position at the Lions Youth Football Camp.

ONLINE — The Lapeer County Hockey Association is registering youth hockey players ages four and up for the 2011-12 season. Registration forms can be found at the Polar Palace Arena Complex or online at www.polarpalace.com — L.P.

FLINT TWP. — The Carman-Ainsworth girls’ basketball program has kicked off its training workouts for kids in grades six-12. Training takes place every Tuesday, Wednesday and Thursday from 6:30-8 p.m. at the high school. The program is designed to help all girls in the district learn the game of basketball and provides detailed training for those needing to brush up on their skills. — L.P.

SWARTZ CREEK — The Girls Lacrosse Association of Michigan will host a lacrosse camp June 27-30. The camp will have two sessions open to various age levels. The morning session is for youth level players and the afternoon session is for high school players. Camp will take place at Elms Road Park in Swartz Creek. Hosts of the camp are Mackenzie Lawler of Okemos, a player at Div. 1 Robert Morris University, and Andi Raymond, a grad of Rockford who plays for Div. 1 Towson University. — L.P.

BURTON — The annual Gus Macker 3-on-3 basketball tournament takes place June 25- 26 at the Courtland Center Mall parking lot area. The tournament is designed for male and female players of all ages, sizes and abilities. Teams are computer-matched into competitive divisions according to the age, height and playing experience of all four players on the team roster. This is the fifth year for the Macker in Burton that has chosen the Food Bank of Eastern Michigan as its charity.

Michigan State basketball alum and Flintstone Mateen Cleaves is scheduled to be a celebrity Slam Dunk judge this year, which includes cash prizes for the winner and runner up. The Boys and Girls Club of Flint will be hosting a pancake breakfast on Saturday and Sunday morning for a nominal cost. Details: www.macker.com/ tournaments/ burtonmi/ 9- burton- mi. htm — L.P.

GRAND BLANC — The Ryan Schlee 3v3 Soccer Tournament will be held Saturday, July 23 at the Rick Hartker Soccer Complex, on Maple Road between Genesee and Belsay roads. Go to www.grandblancsoccer.net for information and registration. — D.N.

The low rounds for the girls’ Championship was posted by Power’s Chloe Lawrie with a 81, Kearsley’s Alicia Flood was the low net finisher with 85, net 70. The boys’ Championship was led by Grand Blanc’s Alex Grimmer and Conner Carey with 77s. Conner took the net score because of handicap.

The first, second and third flights are as follows:

RICHFIELD TWP. — Looking for a different kind of recreational outlet? Goldenrod Disc Golf Course has a full-size, 18-basket course at 6405 Irish Road in Davison’s Richfield Township. The facility is open year around, 8 a.m.-sunset and the disc golf is free. Players must bring their own discs. A printable scorecard and course map is available at www.geneseecountyparks.org. Details: 810.736.7100. — L.P.

Other camps around the state are still upcoming. Register at 313-262-2248 or email: youthfootballcamps@detroitlions.com. Online registration is available through Ticketmaster. — L.P.