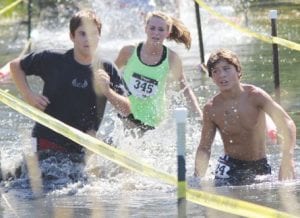 Matthew Kettelwell of Croswell and Hannah Tubbs of Sandusky worked their way through the Dare Devil Dash in Brown City last Saturday.

MT. MORRIS — The very successful inaugural Warrior Dash last weekend that saw more than 24,000 participants compete over the two days resulted in the race venue already being set for July 28, 2012.

The number of participants made the Michigan leg of the race the second-highest attended race in the nation. Officials enjoyed the crowds, neighboring communities and hotels and restaurants so much, they announced on site Sunday that the race will indeed return next year. Typically, the race looks for new venues each year, but the record attendance made the decision a no-brainer. Goodrich grad and Ypsilanti resident Erin O’Mara won the women’s race on Saturday in 25:52.95, while Grand Blanc grad Curtis Vollmer won the men’s race in 22:26.45. On Sunday, Chad Anastasoff won the men’s race in 23:17.20 and Hannah Brisson won the women’s in 26:05.10.

Also returning next July 28 is the Dare Devil Dash in Brown City which had 300 runners take part in their inaugural race. Many chose to attend the larger Warrior Dash instead this time around. — L.P. Outdoors enthusiasts to get special deal at MIS

BROOKLYN — Show your 2011 Michigan hunting, fishing or ORV license, or snowmobile trail permit at Michigan International Speedway and get 50 percent off Friday and Saturday tickets on Aug. 19-20, and $10 off Turn 1 tickets on Sunday, Aug. 21. Just go to the Department of Natural Resources (DNR) booth, show your license or permit, and get a voucher for the MIS box office. — L.P.