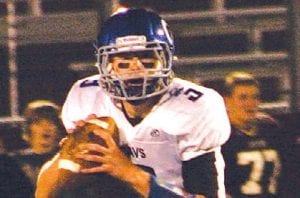 FLINT TWP. — High school football fans will want to circle Sunday, Oct. 23 on the calendar when FOX Sports Detroit hosts its annual Selection Sunday show to reveal the postseason playoff teams. The show airs at 7 p.m. with district play beginning either Oct. 28 or 29, or Nov. 4 or 5. Regional play follows on Nov. 11 or 12 with semifinals on Nov. 19 and the finals at Ford Field Nov. 25-26. Details: www.mhsaa.com, football link. — L.P.

ADRIAN— Ever since their season opening win over Xavier, Carman-Ainsworth graduate Dwan Simmons and his University of Michigan-Flint Kodiaks club football team have hit a bit of a losing skid. The opening game, a 35-3 win, seemed quite dominant, however, the same results were not obtained on the road. The following week, the Kodiaks traveled to Wright State, falling, 12-7, in their first road game of the year. The losing continued into their next game, with a 42-6 loss at Siena Heights last Saturday. Michigan-Flint now sits at 1-2 on the season, and faces a tough test for the rest of the year. The Kodiaks return to the field on October 22 in a matchup with the club football team from Ohio State University at Atwood Stadium. October 30 will be the final home game of the year for the Kodiaks, against Miami of Ohio. Michigan-Flint will wrap up the season on the road against Southern Illinois University at Edwardsville the following week. — B.P.

AREAWIDE —To provide children with the protection they need during games and practice, Delta Dental of Michigan is partnering with the Detroit Lions Youth Football Camp, Think Detroit Police Athletic League and Detroit Pistons Youth Training Camp to provide mouth guards for more than 8,100 children across Michigan. “Mouth guards are a mandatory piece of equipment for all levels of the game of football from youth flag football to college football,” said Chris Fritzsching, director of youth football for the Detroit Lions. “Even in our non-contact Detroit Lions Youth Football Camps, we stress the importance of molding the mouth guard properly and then ultimately emphasizing the wearing of the mouth guard to become a habit. The mouth guard is a vital piece of equipment, no matter what sport is being played.” The National Youth Sports Foundation for Safety reports that an athlete is 60 times more likely to sustain damage to the teeth when not wearing a protective mouth guard. Prior to mouth guard use being mandated by the

state, the National Federation of State High Schools reported that 50 percent of injuries during high school football were oral-facial. Today, they represent less than one percent of injuries. However, according to a study conducted on behalf of Delta Dental, even in football, only 70 percent of parents report that their child wears a mouth guard at both practice and games, and, only about 44 percent say that their child wears a mouth guard for hockey practice and games, where it is also mandatory. Details: www.deltadentalmi.com. — L.P.

GENESEE COUNTY — The Dept. of Natural Resources wildlife officials remind hunters that the DNR would like to check as many deer as possible during all the deer hunting seasons to continue gathering critical data of Michigan’s deer herd. Officials say the data is important for monitoring the herd’s health and determining population size. During all deer hunting seasons, deer can be checked at DNR Operation Service Centers from 10 a.m. -2 p.m., Monday through Friday (except state holidays). Other check stations are only open on specific days. Details, see the list of DNR Deer Check Stations at www.michigan.gov/dnr. Hunters should note that the last day to have deer checked is Jan. 6, 2012. At the check stations, DNR wildlife biologists will test any deer that is identified as “suspect” for chronic wasting disease and bovine tuberculosis. The DNR also also collect samples of deer from areas where disease concerns have been identified, which include the five counties in the Northeastern Lower Peninsula within the TB area, as well as Iosco, Shiawassee, Cheboygan, and Emmet counties. Hunters who cooperate also can have their deer aged by teeth check and can receive a Deer Hunters Cooperator patch. — L.P.

Carr, Chiefs off to slow start

KANSAS CITY, MO— Carman-Ainsworth graduate Brandon Carr and his Kansas City Chiefs are currently 2-3 overall, which is good enough for third place in the four-team American Football Conference-West, leading only the 1-4 Denver Broncos. Ahead of the Chiefs are the 4-2 Oakland Raiders, and the 4-1 San Diego Chargers. Kansas City opened the season with three consecutive losses. In week one, the Chiefs were dominated at home by the Buffalo Bills, 41-7. The following week they were slaughtered by the Detroit Lions, 48-3. After a close loss to San Diego, 20-17, the Chiefs have won two straight. On October 2, Kansas City hosted and defeated the Minnesota Vikings, 22-17. The Chiefs then traveled to Indianapolis to take on the Petyon Manning-less Colts, as the Chiefs went on to win, 28-24. Through those five games played, Carr has started all five games amassing 14 solo tackles, with two assisted tackles. He also has three pass deflections, and one interception, which he returned for 14 yards. — B.P.

LAPEER — The VIEW Newspapers and Lapeer County Press now have opportunities available for unpaid internships in the sports department for the fall and winter semesters. Applicants should be at least 18 years old and attached to a college internship program, length of commitment negotiable based on credit requirements and those interested must be available during standard business hours. Details: Lisa Paine at 810-452-2626 or lpaine@mihomepaper.com. — M.S.