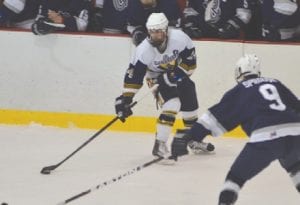 FLINT TWP. — The Flint Junior Golf Association will open its on-line registration April 9 through May 13, with play beginning June 18. Started in 1939, FJGA is the oldest and one of the largest junior golf programs in the country, with a current membership of 875 golfers from Genesee County.

On-line registration will be accepted by logging onto www.fjga.org and following the registration directions. Registration forms are also available at King Par and participating golf courses. — D.N.

Junior Generals not the champions

GENEVA, Ill. — After eliminating Pittsburgh and Cleveland from rounds one and two of the NA3HL playoffs, the Flint Junior Generals made the trip to the Fox Valley Ice Rink last weekend to play in a round-robin tournament against the league’s other top-three teams to decide the 2012 championship. Flint beat Toledo, 2-1, last Friday before losing to St. Louis, 4-3, last Saturday and Granite City, 3-2, on Sunday.

In that final matchup against the Lumberjacks, it was Warren Carter who blasted the game’s opening goal for the Junior Generals at 14:50 of the first period on the assist by Joshua Kestner before Granite City came back to score twice in the second to take a 2-1 lead. Andrew Lay then tied things back up for Flint at 2-2 with help from Richard Jansson at 2:38, but that’s as close as they’d get because the Lumberjacks were able to deliver the difference-maker at 6:18 off the stick of Trevor Ness on passes from Riley Bengston and Peter Linblad.

For the 2012 postseason, Grand Blanc’s Cody Damon and Lay tied for second on the Junior Generals with seven points and Davison’s Nicholas Goettel came through with three assists. During the regular season, Flint had a record of 35-13-0-5. As for this year’s tourney, St. Louis was the eventual champion with 14 points during the playoffs, Granite City was second with 12 and Flint and Toledo were third and fourth with 10 and eight, respectively. — M.S.

The training can begin

FLINT — The Crim Fitness Foundation announced recently that registration for the 2012 CrimFit Adult Training Program is now open until April 16. The program lasts 15 weeks and prepares runners for 5k, 8k and 10k events at the Crim Festival of Races on Aug. 25. All participants will be entered into a Crim Festival of Races Event plus two other local races and will receive a t-shirt for $140. This year the Crim will also offer 20 need based scholarships for its adult training program. Details: www.crim.org. — M.S.

GRAND BLANC — Head coach JD Wheeler and the Grand Blanc baseball team will host their annual skills clinic for kids ages 5-12 on May 5 from 9 a.m.- 12:30 p.m. at the varsity field, 12500 Holly Rd. Cost is $50 including a hot dog lunch before hand, each attendee needs to bring their own bat, glove and baseball hat and every player will get written feedback on the five tools of the game, which include fielding, hitting, catching, pitching and speed. This event is open to athletes regardless of residency and all proceeds will benefit the Bobcats baseball program. Details: 810-348- 2865 or jwheeler@grandblancschools.org. — M.S.

BURTON — On April 20 at Ice Mountain in Burton, the second annual Mid-Michigan High School Alumni Tournament benefits the Food Bank of Eastern Michigan and MI Youth Hockey Scholarship Fund. This tournament had 12 teams last year and brought in upwards of 14,000 spectators. Details or to sign up for this tournament, Eric Lemieux at 810-223-2964 or Bryan Hall at 810-691-5686. — L.P.

DAVISON — Area women are invited to join Camo and Lace for a free night of fun at Barbeque and BUNCO on Friday, April 13.

Camo and Lace, a woman’s group that encourages females to get involved in outdoor sports, including hunting and fishing, is putting the camouflage away for an evening and getting out the lace for this upcoming event. Participants do not need to have experience playing BUNCO. Menu includes pulled pork, dessert and other picnic fare. Event runs 7-10 p.m. at Williams Gun Sight and Outfitters, 7389 Lapeer Rd., Davison, just west of Irish Rd. near I-69, and is free.