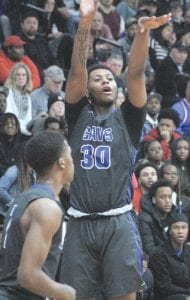 Carman-Ainsworth’s Rasheed Brown knocks down a threepointer against Grand Blanc earlier this season. Carman- Ainsworth boys saw their basketball season suspended at the district finals level. They, too, along with the spring athletes, hope their season doesn’t get canceled. Photo by Joe Oster

GENESEE COUNTY — The COVID-19 outbreak has left high school athletes in an unprotected waiting period as high school sports remain up in the air. The winter sports season was suspended indefinitely on March 12 by the Michigan High School Athletic Association (MHSAA), in the midst of the boys’ and girls’ basketball postseason tournaments. Schools also closed statewide and all spring sports were postponed until April 6 at the earliest. The MHSAA has not officially canceled anything.

With numbers of those infected by COVID-19 on the rise every day, it is unknown if athletes will see the conclusion of the winter season or a spring sports season at all. Area coaches have a lot of input on the situation and how their athletes are working to stay seasonready should the sports seasons resume.

The Goodrich boys’ basketball team was expected to make a strong postseason run as it remains alive in the postseason and is state ranked in Div. 2.

“They’re still hanging in there,” said Goodrich boys’ coach Gary Barns. “They haven’t canceled anything. We’re cautiously optimistic. We know the longer it goes, the harder it’ll be. Had this not happened, tonight (Mar. 18) would’ve been the regional finals. I got a call from (Detroit) Cass Tech’s coach, and he said ‘what do you think?’. I said we’re just doing what they say. We can’t be with the kids – everything’s closed off. It’s just day to day. We’ll do what the professionals say.”

“We felt really good. We’re rated awfully high and that sells papers. People get into that stuff. Every game we play, we have that opportunity to show what we’re made of and I really felt last Wednesday when we played Lake Fenton in the district semifinal that we were starting to really come together. Our senior leadership is tremendous.”

Goodrich girls’ soccer coach Evan Huizenga noted that this is something that coaches and players have never experienced before.

“This is like unchartered water, we have a team, but we cannot meet with them. It’s almost like we are on Spring Break mid-season and have ideas about the season, without knowing when it will resume,” Huizenga said.

“We are fortunate to have technology to reach out and be in touch through many different avenues with the players, parents, trainers, admin staff, and so many more. We also have the tool box of the digital world that we can encourage our players to get out and do some activities,” Huizenga noted.

Huinzenga also added that technology will be key for players at this time and give them an avenue to continuing working hard by themselves to stay season-ready.

“One thing that we have at Goodrich that we are so grateful for is the Strength and Conditioning Program. Coach Tommy has given the opportunity to all athletes to work out in the off season and in season. He works with all the coaches and teams. While we are on a short break, the app that we use is still a tool that we can all use. It offers at home workouts and mobility sessions for the players. They log into the app, do the workout and then record that they did it. It gives coaches an attendance report of which athletes are using it, and although it’s not perfect, it’s a great offering that we have for our athletes.”

“While we are on break, I would bet every coach is encouraging players to remain active, but being safe in doing so. We need social distancing, but that does not mean that we cannot go for a run by ourselves, it just means that we should not have a crowd like the Crim when we go for a jog.”

“As for our return to Spring Athletics, I am ready for a game…. Not really prepared for it, but just ready to let the players play. We will all look a bit sloppy, but if the players remain active and they give us the green light to play games immediately following the State of Michigan School Closures, then we play! We made it through our try-out period, but we are not yet concrete with our rosters. We had players absent, ill, etc. that were not with us, but we can iron that out when we return, but for the most part we have teams selected.”

“With the MHSAA ruling, I’m currently working on virtual connections where my players can still interact with each other and do things at home to keep their mental and physical shape intact,” said Grand Blanc softball coach Jami Neubecker.

Chuck Vierk, Grand Blanc lacrosse coach, expects his players to develop a mental and physical routine to stay ready for the season. However, he still wants them to abide by all safety precautions.

“Athletes should still have a routine and try to abide by it,” said Vierk. “Any and all athletes should be moving around, finding something to do while at home (help with chores, workout, find a new hobby, get caught up on homework, etc), or find something to keep their minds activated. I have been encouraging my athletes to watch old film from either prior seasons or games from the past. This allows the guys to stay active and think about lacrosse but also

14 start to recognize how to break down film and recognize tendencies. We also have been encouraging our guys to listen to what the recommendations from the school and government have been saying and that is to stay home! If we want our season to resume and have a season at all, we need to stay home now and beat this virus by flattening the curve.”

Vierk also noted that once the season is under way, there will be a heightened intensity due to the shortened schedule.

“My expectations for the upcoming season are still going to be the same as if we were still on and practicing right now and that is to be competitive and athletic,” said Vierk. “We plan on using our strengths of senior leadership as well as our competitive nature to help lead us into the season. With a shortened season, it does mean that some changes are going to happen with game schedules but also how we prepare. We have to be mentally prepared to have multiple games during the week and this means that we have to establish a strong work ethic from the get go and understand that practice time is going to be huge! We must be able to maximize our time together to get better and show case this talent we have on our team right from the get go.”

Of course, an altered schedule will present a great deal of challenges to any team.

“A shortened season will present some challenges in the sense of less practice time and the possibility of more game days and finding refs,” said Vierk. “Practice time will crucial as we plan on putting in a offense, a defense, man up/down, a clear game as well as wing play on faceoffs. There is a great deal of information that needs to go into preparing for the season. The other challenge is getting the younger guys acclimated to the speed and physicality of lacrosse. The upperclassmen and returners will be fine in this sense but our new players as well as younger players [freshmen and sophomores] will need the extra reps to get better, and they will lose out on some of the game reps and extra practice time that will make them better. The biggest takeaway is that we have to be flexible and ready to do what needs to be done at a moment’s notice.”

Dale Newton, Bendle softball coach, is worried that the postponement will put teams behind, but is hoping that players will utilize the ability to practice on their own.

“All they can do right now is work on there physical fitness at home and some gyms,” said Newton. “They can also go to places like Bullpen Sports to work on their game. If they do this, it will be on there own or with their parents. Coaches are not allowed to coach at this point. You can Work on hitting, pitching, and fielding at Bullpen Sports. And my expectations for the rest of the season, is that we will obviously be behind in team play. But this will be the same for all teams.”