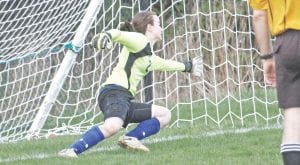 Carman-Ainsworth keeper Arianna Vantine is a key cog in the soccer program that is seeing its largest numbers since 2000.

The Cavaliers have three key players they will need to replace this season. All three were captains.

Carman-Ainsworth does benefit from having a veteran infield but the outfield will be much younger.

Gagnon and fellow senior Matt Durbin are the team’s top two hitters. How well the young players play with the veterans will tell how far this team will go.

“We are still looking for leadership that will decide the attitude of this year’s squad,” coach Steve Faculak said. “With the younger players we will need the first few games of the season to see what kind of baseball will fit our play.” – K.W.

The Cavaliers open up the 2017 campaign with much optimism about the season ahead. After not having won a match last season, Carman-Ainsworth returns four golfers who now all have at least one season under their belts.

“I can’t ask for better kids,” said coach Bob Blaylock. “This team is definitely going to be better, they’ve all improved.”

After having lost just one golfer to graduation, Carman-Ainsworth is poised for a turn-around season.

“I’m optimistic. The kids want to play and they’re excited about the season,” said Blaylock. “They have at least one season under their belt, they come in knowing they’re a better team. We’re going to win matches this year.” – A.V.

After a constantly improving first season as a co-op between Carman- Ainsworth and Davison, the squad brings back most of its roster. Most girls on the team have only been playing lacrosse for a single year, but if you saw them on the field, you wouldn’t think that was the case at all. About half of the team will be brand new but seem to be picking up the sport quite well.

“I expect this team to improve every game, to play to their best ability and to come together as a team,” said coach Christina Wills. “I am not stressing wins or losses. This team has a lot of passion and just really enjoys the sport.” – B.P.

The Lady Cavaliers are fielding a full roster this season of 23 girls, which according to their nine-year head coach Jessyca Mathews, are completely focused on doing their best this season, both on and off the field.

“The soccer program is the largest that it has been since 2000, which includes approximately 50 members,” said Mathews. “That is a testament to the girls that have been involved in soccer the past three years. The soccer program has become a place where girls of CAHS feel the need to be a part of the excitement and bonding… I’m proud to be in charge of a program dedicated toward the true concept of Soccer Sisterhood. The number may seem like an army, but the girls are truly bonded as one.” – K.R.

The Lady Cavs will miss Maddison Cox after her departure last year but several members of the team will be jumping at the opportunity to fill that void. Taylor Jarnigin, who played first base, was also a key loss in the offseason and second base is also vacant without Makaila Garrison. Sarah Thurston was at third but it appears her sister Hannah will be filling her role.

Catcher Jada Black, outfielder Morgan Sherrer, outfielder Makala McDaniels and shortstop Alexis Ritchie are all back for the Cavaliers this year.

“We have a little more speed this year, so that will help overall,” said coach Joy Roe. “We are a younger team and there is a lot of growing that needs to be done. We are going to face a very tough season but we will do the best we can. We have a positive energy and girls are willing to work.” – B.P.

“I have 14 ladies who want to play varsity,” said Chunn. “Competitive matches will determine who makes the varsity lineups. Some played JV last year, others are first timers and a few seniors who had not played tennis before. They may end up being reservists or fill-ins.

“I’m glad to see the kids coming out to play and/ or learn a sport. I don’t cut anyone so they will play in some capacity. The core six will be the backbone to the program and we are looking forward to the season.”

Chunn said he will also have a partial JV squad this season, led by Claudine Cuthbert. She’s a tennis player from the club level and also did some coaching at Northwestern, so she agreed to take on the girls JV squad. Former JV coach Dave Daniel went to Fenton to take over the varsity. – L.P.

The Cavaliers have five returnees in Wyatt Pangerl, pole vaulter, Romeo Evans in shot and discus, Aaron Williams in long jump and relays, and Trent Barron and Marshall Brooks, who will compete in both the 400 and relays.

Getting the right message across to the team will help them be successful.

“We need to convince the team to be able to compete at the state level,” coach Ken Domerese said. “They need to practice every day while they are there to compete in everything we do.

“To realize the rest of Michigan track works like crazy to be state champions, which does include staying eligible and being good citizens. The most difficult thing is we have a great coaching staff and for our athletes to reach any level of success they have to follow the coaching that is afforded to them.”

The Cavaliers have a number of girls who should make an impact this season. Aleah Mixon stood out in the 60 at the Saginaw Valley State meet in March. Me’Aira Bryant, Tamaria Jones and Essianna made an impact in the 200. Areyanna Harrison placed in the 400 at SVSU and Kierra Gillard and Rayven Brantley placed in the 800. Niajah Hood, Bailey Curtis and Aimee Randall were factors in the 1,600. Kya Powell, Jessina Aaron, Muriel Rutheford and Destiny Morris made an impact in the 1,200 relay. Falon Fletcher was a placer in the shot put and Shai’Tara Southwick, Karyn King, Danielle King and KeNiya Henderon made an impact in the 2,400 relay at SVSU. All these girls should be factors in these events this season. – K.W.