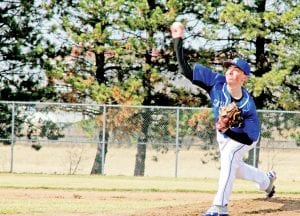 After winning the Saginaw Valley League title in 2013-14 to break a 21-year championship drought and falling just short in 2014-15, one challenge the Cavaliers are going to face in their quest for conference supremacy this season is defeating a trio of familiar faces — Lapeer, Davison, Mt. Pleasant — in unfriendly territory. Because the squad also has a myriad of other issues to deal with, including a major adjustment to the Saginaw Valley League format forced by a lack of participation from the schools in Flint, head coach Steve Faculak has his work cut out for him.

“Things of notice for our team will be our ability to play on the road. Big games at Lapeer (League Champs), Mt. Pleasant (90 minute drive) and Davison will test our mental toughness,” said Faculak. “This year we lost (Flint Southwestern and Northwestern) from the schedule. Now the former split league will now be one. Teams like Bay City Western, Midland, and Mt. Pleasant will (excel) this year. The excitement will be to see if a team surprises everyone with some good road wins.” 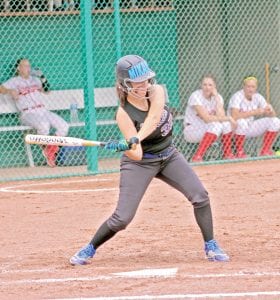 Carman-Ainsworth’s Mikaila Garrison steps into her swing in a game against Swartz Creek last season.

The foundation of the Cavs team this year will be seniors Jawanza Edwards, a centerfielder, and pitcher Austin Jerome, both All-League honorees the past two seasons. Cooper Betancourt is also back after earning unanimous 2015 All-District accolades while Jacob Wilkos returns to left field. Backing up these veterans are juniors Trent Green at shortstop and Spencer Fiewig in right field while sophomore Chase Matusik is the squad’s left-handed closer.

“We are hoping that some underclassmen will step in and fill the three positions open from last year,” Faculak said. “I feel good about our defense and starting pitching. My concern is for the bottom half of the lineup at the plate. We really need to see some production from that part of the lineup if we are to contend.”

Gone from a year ago are starting pitcher/second baseman Austin Yost and right fielder Leon Bell. Last year the duo combined to bat .350 with 42 RBI and now Faculak has to find a way to fill that void.

“I feel our strongest attribute will be our veteran leadership. With young players filling in vacant spots, captains will have to make the correct calls on the field to give these kids chances to be successful,” said Faculak. “It comes down to making plays, and I feel we have some playmakers on the team.”

Last season the Cavaliers got edged out for the SVL championship at home against Lapeer. This came in spite of the fact Jerome pitched a four-hitter that included a pair of bunt singles.

“It really showcased the athleticism of Lapeer to overcome what ended up as a game of pitching dominance,” Faculak said. – M.S.

The Cavaliers graduated their best player last year in Haywood Petty but have five golfers back.

Senior Noah Vanderhyde, juniors Tyson Fields and Aaron Floyd and sophomore Kaden Rytlewski all played in a tough Div. 1 district tournament, where Petty tied for sixth and qualified for the regional. Sophomore Jalen Stewart also returns, and freshman John Karbowski joins them on this year’s team.

“We lost our best player last year, and that will hurt,” said Carman-Ainsworth coach Bob Blaylock. “But even though we will be young again this year, our experience will help. With help from John Karbowski and maybe some others trying out, we should be better than last year.”

Like every other team in the area, the Cavs have been kept off the course by cold, wet weather.

“We haven’t been able to make the team official yet, so there may be some surprises,” Blaylock said.

The Carman-Ainsworth team has combined with Davison this season. All the matches this season will be considered scrimmages, so they will be called C-A-D.

Last season the Cavaliers lost three players to graduation and lost all its matches.

There are a total of 18 new players on the combined teams. All the girls who participated last season played all over the field due to the total lack of numbers.

“I think we will have a much better season this year,” coach Mattie Pearson said. “We have more interested players.

“They’re working hard in practice and have been committed to the team.” – K.W.

The Cavaliers lost four players to graduation and a foreign exchange student off last year’s 3-10 squad. The good news is Carman-Ainsworth has 10 players returning this season.

Arianna Vantine returns in net this year. She has been the team’s keeper since her freshman year.

Natalie Avery will play midfield this season. She was switched from defense up front to take advantage of her speed.

Four-year varsity player Emma Bostwick will occupy one of the defender spots and sophomore Karla Bell will lend a hand on the defensive side. Bell was named captain of the team this season.

Speedy Destinee Lester will play forward. Six-foot-two Jasia Caldwell will man the center-midfield position and Payton Dixon will be a defender.

“All four of them are girls that people will be talking about,” coach Jessyca Mathews said.

Mathews feels good about this year’s squad. She believes the team has an excellent chance of bettering last season’s record.

The Lady Cavaliers continue to improve and returns with a nice core of last year’s roster despite graduating four players.

“We had some great moments from last year and some not so great,” said coach Joy Roe. “Some amazing wins and horrible losses, fantastic diving catches and easily caught pop flies dropped, but we have made improvements with each passing year.”

“This year we also have more speed, more experience and more determination,” added Roe. “This year is coming with some injuries and problems, as well. Four players have shoulder injuries, three have knee injuries and one had a back injury.

“So based on returning players, new players and trying to overcome all the setbacks from injuries, we have work to be done, but it should be fun, enjoyable and more of a winning season. We are looking forward to great wins, less errors and lots of improvement from last year.” – B.P.

Challenge matches will continue into the first couple weeks of the season as coach Bob Chunn looks to reload the six vacancies left by graduation. Even junior J’lynn Corder, easily Chunn’s top player will compete for the coveted No. 1 Singles position. Now a junior, Corder is the only club player who plays all year long. Others vying for the singles positions include Megan and Katie Speaks, Dorothy and Mary Dollinger, Laiya White and D’Mya Mason. Chunn says Mason will land one of the key positions for sure. Also in the mix this season are several players who played exhibition only matches last season. They’ll earn varsity starting spots. Chunn noted seniors Megan Thompson, Dymond Hampton and sophomore Rachel Kuzzera as key players this season.

Newcomers include Mary Dollinger, a freshman and seniors Chelsea Latchaw and Alexandria Rhinevolt. Other players are still floating in and out of the program to see if they can land on the starting lineup.

“Right now we are practicing inside,” said Chunn. “I think we’re going to have a hard time against the club players from Midland and Dow, so we’ll just have to go out and do our best. We’ll do well against Kearsley, Davison, Powers, Goodrich and many of the other area teams. J’lynn is our only club player who plays year round. The other girls are just involved in other sports like swimming and volleyball, so we’ll go out each time and do our best.” – L.P.

Carman-Ainsworth lost Tyler Pangerl and Devonte Johnson. Pangerl held school records in both the 800 and 1600 while Johnson broke the school record in the pole vault.

‘In 2016 we could be top eight again,” coach Kenn Domerese, who is entering his 41st track season, said.

The Cavaliers return Kahlil Johnson in the discus. He had a throw of over 160 feet last season.

Also returning is Cahlil Brownlee in the long jump and hurdles. Brownlee had a jump of 22 feet last season.

Juan Willis is a 6-foot-4 high jumper and Kyle Mason ran a :49 second 400 last season. Carman-Ainsworth also has four relay teams that should qualify for state.

The Cavalier girls will be strong in the sprints this season with five runners who should pile up the points in the sprint events.

Laura DePew runs both the 100 and 300 hurdles. Aleah Mixon, a sprinter, and Cherry Smoots-Hoyle, who runs the 400, round out the Cavaliers’ top contributors.

“We are strong in the sprint events,” coach Dave Thrash said. “My distance kids are starting to come around.