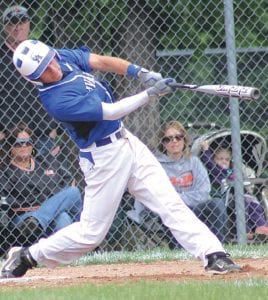 Justin Hubbard is back and swinging for the Cavaliers.

One area the Cavaliers won’t be lacking in this season is arm strength. Combine that with the lessons this squad learned last season and things can only get brighter for third-year head coach Tom Miller.

“This year we have pitching and experience. I will have 10 pitchers on the team with six kids who can start and six of the kids have varsity pitching experience,” said Miller. “We have 10 players returning from last year with six players having three years of varsity experience. We need to improve on hitting and winning the close games. Last year, we lost eight one-run games and lost three games by three runs or less, so getting over that hump is important.”

The Cavs have 10 players coming back from last season’s 18-man roster. Senior leadership could also be in high supply thanks to athletes such as Justin Hubbard, a four-year varsity third baseman/pitcher/ outfielder, who will play for Adrian College starting this fall, shortstop/second baseman Brandon Bobcean, left fielder Grant Roe and catcher/ pitcher/infielder Jamaal Dixon. Juniors Brennan Gleason, who plays third and first base when not in his role as the team’s top pitcher, and catcher/outfielder Connor Storms round out the third-season varsity portion of this lineup. 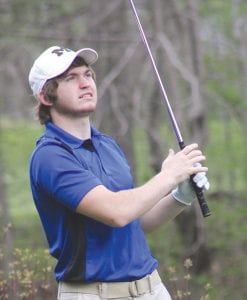 “I expect this year’s team to be very good. We have a lot of players who can contribute with lots of varsity experience,” Miller said. “Three years ago, I took six underclassmen and placed them on the varsity. Last year, we had a lot of close games. I think with the 10 players we have back plus eight additions we have a chance to win the first year of the Saginaw Valley League. However, Davison, Flushing, and Powers all have a lot of players back, so it should be a good race. Hitting and producing runs will be our key. We have a strong pitching staff that should keep us in all of our games.”

Even though the Cavs did lose Colin Heaton, Jake Weissend, Tim Rye and Jeff Wilhelm to graduation, the team is also returning a handful of seniors in their second varsity season, including center fielder Vincent Lang, outfielder/third baseman Sheridan Cox, pitcher/first baseman Ethan Lambitz and shortstop/pitcher Alex Thompson, who was the team’s second-leading hitter in 2012 with a .347 batting average. 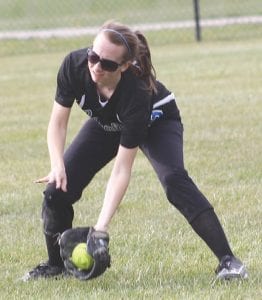 “Davison, Powers and Flushing all have the top returning players, which are pitchers Maverick Prine of Davison, Powers Ethan Wiskur, and Flushing’s Kyle Randik,” said Miller. “Senior pitcher/ shortstop Duane Haskins, a transfer from Bendle, and junior pitcher/shortstop Alfonso Foster, a transfer from Flint Northern, are both expected to help on the mound and field. Look for junior outfielders Entrice Mitchell and Andy Rameriez to contribute, as well.” 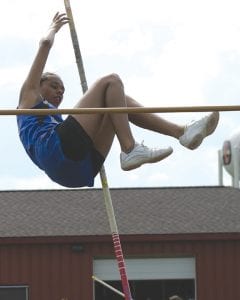 Carman-Ainsworth’s Diamond Scales attempts to clear the bar in the pole vault at Davison during the 2011-12 season.

The Cavs have had limited practice sessions, with the lingering cold keeping area golf courses closed. They will open their season Monday with a nonleague match at Lapeer West. — D.N.

Kara Kelly returns to lead the Carman-Ainsworth girls’ lacrosse team. The Lady Cavaliers had a 19- member roster last season, but lost five seniors to graduation. The future looks bright for Kelly and the Lady Cavaliers because last year’s team featured 10 sophomores and freshmen.

The Lady Cavaliers are scheduled to travel to Oxford on April 12. — E.H.

Jessyca Matthews enters her 14th season at Carman-Ainsworth, seventh coaching the varsity girls’ program. Weather continues to hold her team hostage inside, but a solid group of returning players with enough character to go around will set the tone for the season, Matthews noted.

“This group of kids is pretty special and we’ll be concentrating on our charity aspect this season playing with Madison on our jerseys this time around in honor of Rachel Roop’s niece, age two, who she lost to cancer. Rachel created an organization for kids with cancer and is putting her energy in the right place.”

Roop will play goalie or defense, as keeper Savannah Lacey graduated. Jasmine Jones is the other key loss to graduation, who is now playing at Texas Prairie A&M.

Matthews noted that her other key character leader is Alexis Thurber, who as a freshman discovered a tumor in her throat. She missed half of that initial campaign and got back into soccer last season. She’s now back as long as she gets the green light from her doctors. Matthews says Thurber has been active helping the Ronald McDonald House charity, which aided her and her family.

“Alexis is just a hard, hard worker, is great in the classroom, in life and on the field,” Matthews said. “She’s just another fine role model.”

Senior Shelby Marsh also returns and has already commited to Cleary University in Howell. She’s another that puts in spare time working with kids of all ages directing soccer clinics. Sister, Jordan, a junior, will anchor the Lady Cavaliers’ defense. Newcomers are Diamond Bradley, who has never played soccer, but Matthews said she simply couldn’t turn her away because of her athleticism. Emily Johnson is another freshman, who Matthews said is “a really good player”. Melody Banfield will play at center mid and more than a dozen others will round out the program. Matthews said last week that she had 18 or more girls interested in playing soccer this season.

Carman-Ainsworth’s first game is April 8, the first day the squad returns to school from Spring Break.

“We have not been trapped inside this long in any season I can remeber,” Matthews said. “With Spring Break on top of that, we’ll have to be extra ready to come out and play hard in our first outside competition.” — L.P.

Joy Roe takes over the Lady Cavs’ varsity after coaching the JV the last three seasons. She replaces Joe Willett, who moved over to the middle school to coach that program.

Roe played at Grand Blanc High and drew interest from several colleges, including Mott, Michigan and Michigan State, before back surgery curtailed her college plans. She has played on numerous recreation clubs since then and has coached youth teams.

Roe inherits a team with six returning players and six newcomers. Jessica McClumg returns for her junior year as a pitcher and will share time in the circle with freshman Madison Cox. Senior Jennie Klapko will anchor the outfield in center, with fellow returners Jessica Smith, senior Kaitlyn Reed and junior Samantha Johnston joining her in the outfield. Junior Meghan Borgerding is back behind the plate and will also play shortstop.

Freshman Alainna Gleason will also do some catching, while sophomores Korbin Brandon and Brianna Haskins take over at first base and third base, respectively. Freshman Dani Crowder will be at second base, and junior Elizabeth Roe is in the outfield.

“We have a lot of hard-working kids, and a couple of the ones we pulled up from JV have a lot of passion for the game,” said coach Roe. “We may be a little raw, but we have a good mix of talent and good personalities. They seem to really get along.” — D.N.

Rachel Alexander, Christina Berry, Kayla Davis and Tineshia Howard will lead the Cavaliers on the court. The addition of freshmen K’lynn Corder will also help the Cavaliers. Howard will be joined by Taylor McFadden as the Cavaliers’ captains.

“We lost our top three singles players, but I think the group of girls that we have now are up for the challenge. K’lynn is a very good player and she can definitely earn a spot,” said Chunn.

The Cavaliers lost their top three singles players to graduation that include Taylor Cost, Katie Wilson and Alex Burnett.

“We should be improved this year and aiming to finish at the top of the league. We have girls that compete and want to win,” said Chunn. — A.M.

Kenn Domerese will be entering his 39th season as head coach and looking to add another state championship to his resume. After a disappointing state meet last year due to injury, Domerese and his Cavaliers are ready for another successful season.

Long jumper Tyler Minor, sprinter Antwan Curtis and discus thrower Cleandre Robinson will pace the Cavaliers. Minor had the best long jump of the indoor season and Curtis was All-State last year. Minor will also be competing in the team relays.

“We could be very good this year. We have had a couple of guys involved in training that should help. We strive to win our league and finish top eight in the state. Our talent is there, it’s going to depend on the guys’ work ethic on how we do.” said Domerese.

The Cavaliers lost two of their best performers from last year’s team, Miles Overton and Shane Barron. Overton was the Cavaliers’ top shot put performer and Barron was the state champion in the 400 meters.

The Lady Cavaliers are also returning to the track with a promising season ahead and several girls looking to make a splash this year. Randy Richardson will compete in the 4×400 relay as well as the 400 meters. Her teammates in the relays will be Ashley Hall, Dena Manns and Harmony Williams.

Freshman Tori Harding has found some early success in the shotput, as has sophomore Maria Overton, as both took first and second place respectively at the recent indoor meet at Saginaw Valley State. Junior Nariyel Purches competes in the high jump, while sophomore Diamond Scales has been a key component in the pole vault. Juniors Angel Proby and Kayla Tigner are expected to have a big campaign in the long jump. — A.M./B.P.