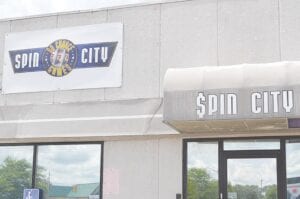 Spin City, located on Miller Road in Flint Township, has been shut down since February 2019 following a cease and desist order issued by the Michigan Attorney General’s office. Photo by Ben Gagnon

David Hoppe of East China Township was convicted earlier this year in Macomb County Circuit Court for running an illegal gambling operation in Macomb County. Following his conviction, Hoppe now faces six new felony charges for allegedly supplying illegal gambling games to Spin City, which operated out of a suite on Miller Road in Flint Township between May 2017 and February 2019.

Hoppe was arraigned on the charges on June 23 in Genesee County’s 67th District Court. The charges resulted from a joint investigation by the Michigan Department of Attorney General and the Michigan Gaming Control Board (MCGB).

Investigators said that the games Hoppe is alleged to have provided at Spin City were the same type found at the former 777 Café he operated on Gratiot Avenue in Roseville.

“Illegal gambling operations are not a 18 victimless crime,” said Michigan Attorney General Dana Nessel. “State gaming regulations direct much-needed financial resources to where they’re needed, like schools and other agencies providing valuable services to residents. When illegal gambling operations siphon money away from establishments that follow the rules, residents across the state suffer.”

Hoppe is scheduled for a probable cause conference today. He was given a $70,000 personal bond.

On Jan. 30, a Macomb County jury found Hoppe guilty of one count of running an illegal gambling operation at the café. He also was convicted on two counts of using computers to commit a crime and a misdemeanor charge of running a gambling house for gain.

On March 5, Hoppe was sentenced to a year of probation and 40 hours of community service for the crimes.

In 2013, Hoppe pled guilty in 72nd District Court to a one-year misdemeanor charge of maintaining a gaming or gambling place. As part of a plea arrangement, Hoppe agreed he would not make available to the public any gaming machines not certified as non-gambling devices by either the MGCB or a laboratory the MGCB deemed eligible to test and certify such machines. The agreement led to dismissal of a 10-year felony charge of conducting a gambling operation where wagering was used without a license.